‘Filming the Camps’ viewings at LAMOTH

Hollywood directors John Ford, George Stevens and Samuel Fuller entertained audiences with American cinema classics like “The Grapes of Wrath,” “Shane” and “The Big Red One.” But their most important contribution to history was their work in the U.S. Armed Forces and Secret Services, filming the realities of war and the liberation of Nazi concentration camps. 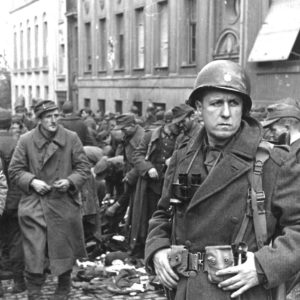 Together these directors, their talented crews and their experiences are the subject of a compelling new exhibition at Los Angeles Museum of the Holocaust – “Filming the Camps: John Ford, Samuel Fuller, George Stevens, From Hollywood to Nuremberg,” which opened on Aug. 27.

The exhibition, curated by noted historian and film director Christian Delage, was designed, created and circulated by the Mémorial de la Shoah (Paris, France) and has been touring internationally. Its appearance at Los Angeles Museum of the Holocaust marks its debut in the Western United States. 20th Century Fox is providing support, and the family of Samuel Fuller is loaning special memorabilia for the Los Angeles exhibit.

“Filming the Camps” presents historic material including rare footage of the liberation of Dachau with detailed directors’ notes, narratives describing burials at Falkenau, and the documentary that was produced as evidence for the Nuremberg trials. The exhibit marks the first time the three directors’ Holocaust films have been explored together, and it also gives a rare look at how they influenced each other’s subsequent work.

“We are honored to host ‘Filming the Camps’ at Los Angeles Museum of the Holocaust,” said Beth Kean, executive director. “We are especially excited about bringing the exhibit to Los Angeles, where John Ford, Samuel Fuller and George Stevens lived and made their mark as filmmakers. The exhibit is a perfect fit for our museum because we teach Holocaust history within the framework of the Los Angeles narrative and emphasize the experiences of Holocaust survivors who settled in Los Angeles after the war.”

“I’ve gone through the personal archives of these three filmmakers in order to prepare the exhibit and the subsequent film I made,” Delage said. “It’s a real achievement to have the opportunity to tell their story in L.A. where it all started and where they all ended … definitely overwhelmed by the experience of war and the discovery of the camps.”

The Los Angeles Museum of the Holocaust is located at 100 The Grove Drive.