Emser Tile has donated tile valued at $250,000 for the Los Angeles LGBT Center’s Anita May Rosenstein Campus, now under construction.

“We had heard about the building as it was being designed and considered bidding on the project,” Ghodsian said. 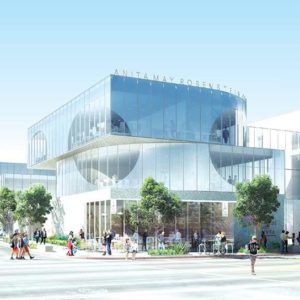 But after hearing a speech by West Hollywood Mayor John Heilman, for whom Ghodsian was a campaign fundraiser, the company decided to go in a different direction.

“[Heilman] gave a short talk about the haves and the have nots and there was something in what he said that affected me deeply,” Ghodsian said. “I thought it would be a good opportunity for us to do something and I thought instead of bidding, we’d donate it. We’ve been in the West Hollywood area since before cityhood (in 1984) and have benefitted a lot from the LGBT community and I thought it would be a good idea to pay that back.”

The first-of-its-kind complex in Hollywood will offer comprehensive multi-generational services and housing, including 135 units of affordable housing for seniors and youth, 100 beds for homeless youth, new youth and senior centers, and much more.

The official groundbreaking for the project took place in March.

“It looks aesthetically beautiful – especially the main building,” Ghodsian said of the campus. “It seems like it’s going to help a lot of people.”

Emser Tile is the largest privately-held designer and marketer of tile and natural stone in the United States and was established in 1968.

“Emser’s generosity is incredibly inspiring and a wonderful surprise,” said Bill McDermott, the LGBT Center’s chief development officer. “It’s only because of the support of companies like Emser, and the more than 100 people who have made pledges so far, that the Anita May Rosenstein Campus will become a reality. We’re enormously grateful.”

‘Atomic Blonde’ is the film we never knew we needed

Thank you Emser Tile Co. for your generous donation of tile for the new LGBT Center. Every contribution is a step closer to reality. The center does so much good work for the LGBT community and the new campus will enable the center to do even more. I hope more companies follow Emser’s example and decide to donate materials for the construction instead of bidding for the supply of materials.