The Coronet Debutante Ball Board (CDBB) announced its newest debutantes at a luncheon at the Bel-Air Country Club on Aug. 5.

Lori Greene Gordon, Beverly Hills resident and chairwoman of the city’s Planning Commission, served as the luncheon’s chairwoman. Gordon was accompanied by her two daughters – Victoria Gordon, who served as a co-chairwoman and Natalie Gordon, fashion commentator of the event. 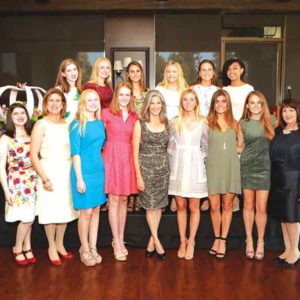 The young women were invited to debut based on philanthropic service criteria and have dedicated their time to volunteering in their community for at least six years.

“We are pleased to present these twelve young women as the 2017 NCL Coronet Debutante class,” said Alice Wilson Gould, Coronet Debutante Ball board director. “They reside throughout the Los Angeles area and each have a genuine interest in their volunteer work. It is inspiring to see this type of commitment and I am confident that these ladies will continue to dedicate their time to inspire as they move forward in both their academic and social ventures.”

Each girl received a gold coronet lavalier to be worn for the first time on the evening of their debut at The Beverly Hilton on Nov. 25. This year will mark the 68th Coronet Ball.