Former Olympic swimmer Janet Evans sat in the Coliseum as a 12-year-old watching the 1984 Games in Los Angeles, inspired to one day represent her country. Over the last two years, Evans, as a member of the city’s Olympic exploratory committee, has helped bring the 2028 Olympic Games back to L.A.

“In bringing Olympic and Paralympic games back to the city of Los Angeles, we will inspire not only people our age, but a whole new generation of young people,” she said to the city’s Ad Hoc Olympic committee last week. 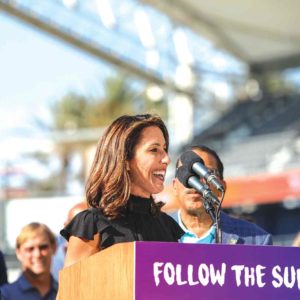 Janet Evans, pictured during the announcement that L.A. had been awarded the 2028 Olympics, addressed the Ad Hoc Olympic Committee during its meeting on Aug. 4. (photo courtesy of the mayor’s office)

The committee began working last Friday to finalize the details of transposing the city’s original bid for the 2024 Games to 2028. Paris won the 2024 Summer Games after the International Olympic Committee made the unprecedented decision to decide the sites of two future games during one bid period. Mayor Eric Garcetti last week announced a deal with the IOC to have L.A. host the 2028 Games.

“We, as city leaders, can be inspired to make sure that there are no cost overruns … that there is a profit that will benefit Angelenos long after 2028,” said Councilman Mitch O’Farrell, 13th District, who serves on the seven-member Ad Hoc Olympic Committee.

“We want to make sure that our successors [on the City Council] inherit the benefit of a really strong process leading to a very profitable ’28 Games,” O’Farrell continued.

One of the key variables is the financial support Los Angeles will receive from the state. The state legislature passed a bill to provide up to $250 million to offset any cost overruns, but the City Council will have to vote to formally accept the 2028 Games before knowing how much the state will offer, if anything.

Assembly Speaker Anthony Rendon (D-Paramount) said in a letter to the City Council that he will work with the state Senate and Assembly to offer state funding.

“Securing the 2028 Games reflects a significant achievement,” he said. “It will benefit the city and the entire state as we showcase the best of Los Angeles and California – with the whole world watching. I am proud to continue supporting the city of Los Angeles hosting the 2028 Games, with legislation that will express that support and commitment from all Californians.”

The state legislature is on summer recess and doesn’t reconvene until Aug. 21.

The IOC will make the equivalent of $1.8 billion in contributions to the city’s organizing committee as incentive to wait another four years. Earlier this year, when IOC leaders mentioned the possibility of awarding the 2024 and 2028 Games in September, Los Angeles officials said they were only bidding for 2024.

Anne Orchier, of the campaign NOlympics L.A., urged council members to weigh the economic consequences, since past cities have suffered through financial difficulties following their time hosting the games.

“We ask you to really consider the impact of signing this contract,” she said.

A recent Loyola Marymount University study reported that 83 percent of Los Angeles residents support the city hosting the 2028 Games, a level of support that is consistent with past polling about support for hosting the 2024 Games.

Gary Toebben, president and CEO of the Los Angeles Chamber of Commerce, released a statement about the “once in a generation announcement” that L.A. will host the Olympics for the third time.

“Since the beginning of this process the chamber has championed the positive economic impact these games will have on our region and the public agrees,” he said. “The most frequently cited reason for support in the poll was the economic boost to Southern California.”

Last December, members of the newly named LA 2028 released a “no surprises” budget, conservatively projecting $5.3 billion in revenue and cost. Members of the Ad Hoc Olympic Committee have said in past meetings that they’re confident the city will profit from the games.