Thousands of people attended National Night Out Against Crime events in the local area on Tuesday to show support for law enforcement and commit to keeping neighborhoods safe.

National Night Out events were held in Beverly Hills and West Hollywood, as well as the Wilshire and Hollywood areas. The Los Angeles Police Department’s Wilshire Division partnered with the Melrose Action Neighborhood Watch for a National Night Out Against Crime event at Poinsettia Park. The event has been held there for nine years. 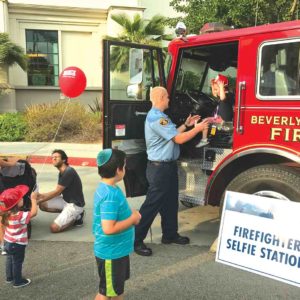 Beverly Hills firefighters gave local children a chance to sit in the driver’s seat of a fire truck at the city’s National Night Out celebration.
(photo by Luke Harold)

“It’s just a good opportunity for the police department and the community to come together,” said Capt. Aaron McCraney, who oversees patrol operations at the Wilshire Division. “It’s an opportunity to build relationships and work toward the future.”

In addition to meeting officers working in their neighborhoods, participants enjoyed music, food and booths with information about city services and other resources. Pink’s Hot Dogs and In-N-Out Burger provided food. Pink’s, which is located off the corner of La Brea and Melrose avenues, has been involved with the Wilshire Division’s National Night Out Against Crime event for years.

“We give to this community as much as we can,” said Richard Pink. “We are trying to support the police who are patrolling this community and keeping us safe and secure.”

The celebration was also vibrant at the LAPD’s Hollywood Division, which hosted a National Night Out Against Crime event in its parking lot on Wilcox Avenue.

Davis said National Night Out Against Crime provides an opportunity for people to interact with officers in an informal setting, instead of when a problems occur. The event included booths with information about local resources and programs such as the LAPD Police Activity League for young children, and the Hollywood Division’s cadet and junior cadet programs. Councilmen Mitch O’Farrell, 13th District, and David Ryu, 4th District.

In West Hollywood, six neighborhood watch groups joined with West Hollywood Gateway, the Russian Advisory Board and the West Hollywood Recreation Services Division to hold nine National Night Out gatherings throughout the city.

“We very much pride ourselves on being a community that has a true partnership,” Bosse added.

An earthquake simulator and a chance to meet a police K-9 were two of the most popular attractions as families walked up and down the 400 block of North Rexford Drive.

“It was a great opportunity to have some interactions with community members, and engage with them on a more personal level,” Beverly Hills Police Lt. Elisabeth Albanese said.

City Councilmember Paul Koretz also came by and spoke at the National Night Out event at Poinsettia Park.