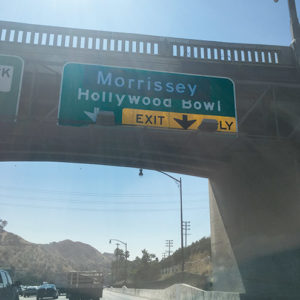 A banner was draped over an exit sign on the Hollywood (101) Freeway Tuesday morning after it was announced that Morrissey will return to the Hollywood Bowl for a performance on Nov. 10. Morrissey, who rose to fame as the front man for The Smiths, will perform classic hits as well as new material from his 11th studio album, “Low in High-School,” which is set for release in November. Billy Idol will open for Morrissey.

The Nov. 10 show sold out on Friday, but Andy Hewitt and Bill Silva Presents announced that a second Morrissey show has been added at the Hollywood Bowl on Nov. 11. Tickets go on sale on Tuesday, Aug. 29 at 10 a.m. The Hollywood Bowl is located at 2301 N. Highland Ave. For information, call (800)745-3000, or visit smarturl.it/MozHwoodBowl.