Police in Hollywood recently arrested a suspect who allegedly attempted to pickpocket a victim on Hollywood Boulevard, and then held the victim down and robbed him before fleeing. 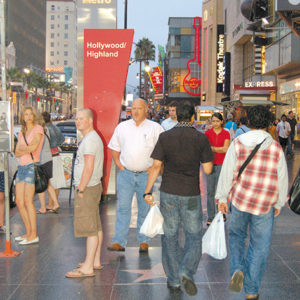 Police warn people to be aware of pickpocketers in crowded places like Hollywood Boulevard near Highland Avenue. (photo by Edwin Folven)

The incident occurred at approximately 7:20 a.m. on July 3 in the 6300 block of Hollywood Boulevard. The suspect, Curtis Jones, 48, of Los Angeles, allegedly approached the victim on foot and attempted to pickpocket him. When the victim held the suspect away and attempted to flee, Jones allegedly pushed the man to the ground and held him down while he stole property.

The victim reported the crime to officers, who later located security camera footage of the robbery. A photograph of the suspect was published on a wanted flyer, and officers from the LAPD’s Hollywood Division arrested Jones on July 25. He was charged with robbery.

Officer A. Davidson, of the Hollywood Division, said pickpocketing is a crime that occurs frequently along Hollywood Boulevard. Crowds gather in front of the Hollywood and Highland shopping complex, the TCL Chinese Theatre and the El Capitan Theatre. While it is a great place sightseeing and taking photographs, it is also a location where people should be hyper-aware of their surroundings, Davidson said.

“Pickpocketing is a crime of lack of awareness,” he added. “Victims are often texting and walking. We always say to have a 360-degree level of awareness.”

Statistics on pickpocketing were not available, but Davidson said the crime occurs regularly. He offered suggestions about preventing pickpocketing that pertain to all crowded locations.

“In the last year and a half, it seems to be dwindling in regards to purse snatching,” Davidson said. “It causes a big scene and there are not a lot of places to hide on the boulevard.”

“The detectives did a lot of leg work on the boulevard and found some cameras,” Davidson added. “The image was very clear. There is a good chance if they stay in the area, we will catch them.”