The West Hollywood City Council continued to make progress drafting local laws to regulate the incoming recreational marijuana industry at its Aug. 21 meeting. Retailers are allowed to open for business starting Jan. 1, 2018, and the City Council will vote on its ordinance later this year.

West Hollywood council members have said throughout the course of this year that they want the city to be at the forefront of the burgeoning recreational marijuana industry.

“What we’re doing here tonight may end up getting modeled by other cities and communities,” Councilman John Duran said. 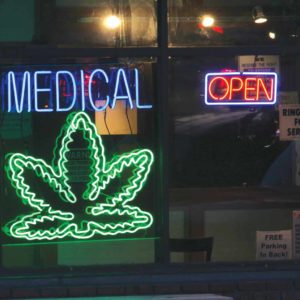 The ordinance will take into account whether West Hollywood’s four medical marijuana dispensaries will also be eligible to sell recreational marijuana. (photo courtesy of the city of West Hollywood)

Earlier this month, the council held a study session to start determining the parameters of the city’s regulations. Guest panelists  included Cat Packer, policy coordinator of the advocacy group Drug Policy Alliance, who has since been appointed to lead the city of Los Angeles’ Department of Cannabis Regulation.

One of the first issues council discussed was the types of licences that will be issued, and how many licensees the city should permit. West Hollywood already has four medical marijuana dispensaries. State law could allow for a combined license that allows one venue to sell medical and recreational marijuana.

A city staff report showed a model in which West Hollywood would issue a total of 14 cannabis licenses, although the final number is subject to change. They included adult-use retail licenses to permit sales of recreational marijuana, cannabis consumption area licenses allowing customers to smoke marijuana on-site and cannabis manufacturing licenses regulating the production of certain types of marijuana products by medical and recreational businesses.

Some of the license types pose particular challenges. Regulating cannabis delivery service within the city could present challenges similar to those caused by Airbnb, with potentially “so much happening online we can’t control,” Councilwoman Lindsey Horvath said.

A merit-based system for granting permits, as opposed to a lottery system that council pondered earlier this month, will also focus on attracting businesses that won’t cause problems in their neighborhoods.

“We want to make sure we end up with people who will be good neighborhood businesses and not trouble,” West Hollywood Mayor John Heilman said.

Pending legislation at the state level could also cause legal concern for West Hollywood. In the state Assembly, AB 1578, if passed, would prohibit local governments from cooperating with federal authorities to enforce marijuana laws that are legal under state or local law, unless there is a court order signed by a judge.

There are “a lot of moving pieces,” Heilman said.

Other cities, including Los Angeles, are also working to enact regulations by the time recreational businesses are allowed to open their doors in January. The Beverly Hills City Council, conversely, voted to ban commercial cannabis.

The city of West Hollywood will host its third annual Cannabis Education Forum on Aug. 26 from 9:30 a.m. to 6 p.m. This year’s event will focus on the implementation of the Medicinal and Adult-Use Cannabis Regulation and Safety Act, passed by the state Legislature in June. The act will regulate the medical and recreational marijuana businesses in California.

The program includes Tim Schaefer, deputy state treasurer at the office of state Treasurer John Chiang; and Bruce M. Margolin, who will receive the inaugural Trailblazer Award to commemorate his 50 years of advocacy for cannabis legislative reform.

“As communities across the state prepare for the sale of adult-use marijuana, it is important for West Hollywood residents and businesses to plan for the potential challenges and opportunities within our community,” Horvath said. “This event is an opportunity to meet cannabis advocates and business leaders to get informed and to help lead the conversation.”