This is the end of an era. We didn’t know we wanted a “Planet of the Apes” prequel trilogy, but science fiction cinema needs more amazing films like these. 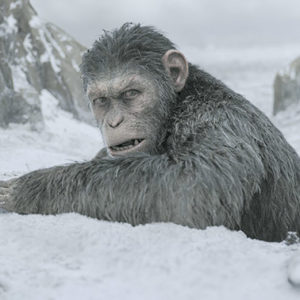 Caesar (Andy Serkis) returns in “War for the Planet of the Apes.” (photo courtesy of 20th Century Fox Pictures)

“War for the Planet of the Apes” might imply a concept it doesn’t deliver, namely a full-blown war, but this is the most daring “Apes” film thus far, abandoning a central emphasis on human characters. Instead, we enjoy a remarkable journey entirely focused on CG characters that doesn’t fall prey to the uncanny valley at any moments.

Andy Serkis deserves an Oscar. What he does in a mo-cap suit is unparalleled. This might be his fourth time depicting an ape on screen (two previous “Apes” films and 2005’s “King Kong”), but his performances never regurgitate or fall flat. As the rebel leader of the sentient-ape community on post-viral outbreak Earth, Caesar (Serkis) is the unchallenged ruler of the apes. But the remaining human military continues to pursue his primate community, feeling the biological clock tick on their own species’ final moments at the top of the food chain.

Caesar, slow to violence, defends his family but mercifully returns soldiers with a message: leave apes alone and violence can stop. That’s not good enough for the Colonel (Woody Harrelson), who finds the apes’ hidden refuge and deals a damaging blow.

Their home unearthed, it’s time to leave the forest, so Caesar and his long-trusted companions – Rocket (Terry Notary), Maurice (Karin Konoval) and Luca (Michael Adamthwaite) – take the fight to the soldiers while the rest escape to a new home in the desert (hmmm, that sounds familiar). But the situation isn’t that simple. Caesar and company stumble across a young girl they name Nova (Amiah Miller), who has trouble speaking, a condition that seems to be spreading across the human population (hmmm, again).

Meanwhile, the ape community is not as united as once thought. Apes like Red Donkey (Ty Olssen) – “donkey” is a derogatory name soldiers give turncoat apes – aligned with the humans, fearing their command of weaponry. And others like Bad Ape (Steve Zahn), so named by humans who scolded him, was not one of the lab apes Caesar freed in “Rise,” but is from a zoo elsewhere. I smell spin-off origin-movie fodder.

Like “District 9,” “War” belongs to a special class of films that make you hate humanity and vote for its annihilation. Perhaps one of the most biting pieces of commentary occurs when a group of apes is enslaved and forced to build a wall for the Colonel, to which Caesar says, “This wall is madness.” Yes Caesar, you’re wise beyond your years. If only a certain orange-skinned homo sapien had half the sense of a “damn, dirty ape.”

Let’s talk about those visual effects. Director-writer Matt Reeves (“Cloverfield,” “Dawn of the Planet of the Apes”) knows his way around a compelling story, but never has a film so flawlessly merged digital with filmed footage. When “Rise” premiered in 2011, we forgave those awkward, sometimes cartoonish moments that highlighted what technical improvements needed to occur in future installments. They might infrequently appear, but only CG specialists and rando cinephiles going full Pretentious 2.0 will notice. The rest of us normies won’t locate a single error.

Back to Matt Reeves. Plenty of muggles hate on the man for his debut film, “Cloverfield,” citing dizziness. That’s a visceral preference. Put that aside, and what’s left is a solid piece of storytelling more films would do well to replicate. Reeves is a trusted filmmaker with a perfect track record. That’s why his next flick, “The Batman,” is almost a shoo-in. May “War’s” emphasis on drama and character development over spectacle, and action in place of those key elements, serve as his resume, the ethos that elevates him above the fold.

Following three successful films, this franchise is far from done, but what’s next will likely not be a continuation of this story but something new. To the trilogy’s strength, we have a clear and poetic end, even if it feels like things were just starting to get really interesting. If Fox is smart, it won’t milk this cash cow dry, but build on it in a unique way. If not, we’ve still had the opportunity to participate in something smart and complicated, more intellectual than dazzling, but wow is it visually dazzling.