Police are warning the public about a series of auto burglaries near the Griffith Observatory on June 24 and are asking for help identifying a suspect in a photograph taken by a witness. 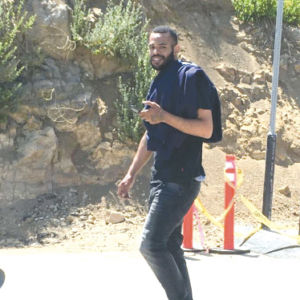 One of the suspects was captured in a photo that police released to the public. (photo courtesy of the LAPD)

Witnesses reported seeing four suspects who were possibly involved in the auto break-ins. The suspects smashed windows and stole valuables left inside vehicles.

The witness who took the photograph of one suspect also obtained a license plate of the suspects’ vehicle – a 2017 gray Nissan Altima. Park rangers attempted to stop the vehicle, but the driver sped away and remains at large. As they fled, the suspects were involved in a hit-and-run collision.

The suspect in the photograph was described as black, 25 to 35 years old, approximately 5 feet 10 inches to 6 feet tall and 180 pounds. He was wearing a blue shirt, black jeans and black shoes, and had a beard. Additionally, the suspect has a distinctive tattoo on the top of his left hand. Police only described the three other suspects as being black.

Detectives with the LAPD’s Northeast Division are investigating the auto burglaries. They believe that the suspects are responsible for other crimes throughout California, and possibly travel from the San Francisco area to commit crimes.