Investigators with the West Hollywood Sheriff’s Station are asking for the public’s help identifying a burglary suspect involved in a break-in on June 23 at approximately 5 a.m. at the Gina Amir Atelier jewelry store at 509 N. Robertson Blvd. 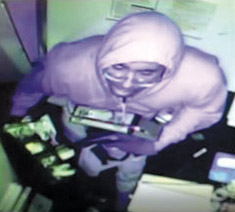 The burglary suspect was caught on video. (photo courtesy of the LASD)

Detectives said a suspect forced entry and stole diamonds and other precious jewels. The male suspect was captured on security camera video committing the burglary and running to a vehicle before fleeing the scene.

The suspect is described as black or Hispanic, approximately 25 to 35 years old, 6 feet tall and 210 pounds. The vehicle was described as a four-door silver or dark colored sedan. Anyone with information is urged to call Det. Omar Luevano, with the West Hollywood Sheriff’s Station, at (310)358-4055. Tips can also be made anonymously by calling Crime Stoppers at (800)222-TIPS.