The Los Angeles Fire Department is crediting fire sprinklers for containing a blaze that erupted on July 16 in an apartment building in Hollywood. 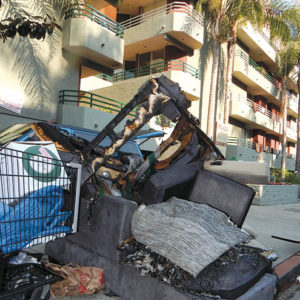 The fire was reported at 6:20 a.m., and firefighters arrived to find a fire in a fourth-floor unit in a building at 1420 N. Sierra Bonita Ave., just south of Sunset Boulevard. Numerous residents called 911, LAFD spokesman Brian Humphrey said. The sprinklers prevented the fire from spreading, he added.

The blaze was extinguished in 17 minutes, and no injuries were reported. Firefighters rescued a dog that was found on a balcony of one of the apartments.

Humphrey said the cause is under investigation, but there is nothing to indicate it was intentionally set. The loss was also unavailable, he said.