Saddle UP LA prepares for its 12th year

Kym Herjavec (formerly Johnson) from “Dancing with the Stars” will be this year’s Saddle UP LA Celebrity Honorary Trail Guide on July 15 in the Griffith Park Mountains.

“Saddle Up LA” is an AIDS Benefit Horseback Trail Ride and Country BBQ. All proceeds support the work of local Los Angeles non-profit The Life Group LA. This year’s goal is to raise $100,000. 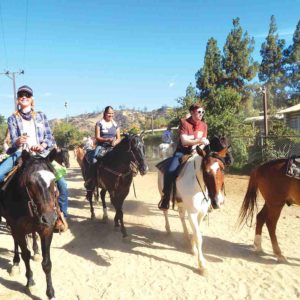 The purpose of the ride is to raise awareness of AIDS, and to raise funds for the HIV services provided by The Life Group LA. It is also an affirmation of the power of compassion and a demonstration that ordinary people can accomplish extraordinary things.

Herjavec, an Australia native, started learning dance at age 3. She became the Australian Ballroom Champion and twice represented Australia in the “World 10” dance championships. She also appeared on the hit Australian T.V. show “Dancing with the Stars,” winning season two. In 2006, Herjavec moved to the United States and began competing on the U.S. “Dancing with the Stars.” She has won the mirror ball trophy twice, once with Donny Osmond in 2009 and again with Hines Ward in 2011.

In 2016, she released her first book, “The 5678 Diet,” and in 2017 she opened her dance fitness studio The Bod by Kym. Also in 2016, Herjavec married her former dance partner Robert Herjavec (Shark Tank).