Pink’s Hot Dogs on La Brea Avenue, which was recently named one of the best casual eateries in the United States by the website Daily Meal, is celebrating one of America’s favorite foods in July during National Hot Dog Month. 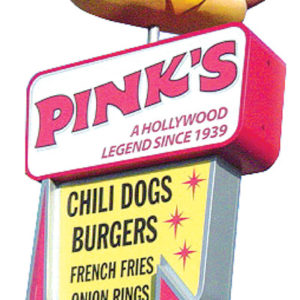 “The America the Beautiful Dog is one of our classic dogs that we use to celebrate National Hot Dog Month,” said Richard Pink, who operates the stand with his wife Gloria and sister Beverly Pink Wolfe. “A lot of people order that for Fourth of July. Everybody loves it.”

However, with 36 hot dog varieties to choose from, Pink urges his customers to try them all. Many are named after the stand’s celebrity clientele – and a dozen different hamburgers.

Pink’s has been an icon in Hollywood since 1939 when Richard and Beverly’s parents, Paul and Betty Pink, started with a pushcart near La Brea and Melrose avenues. Pink’s Hot Dogs was recently named by the Daily Meal as one of the 101 Best Casual Restaurants in America. The website ranked Pink’s as the 15th best casual eatery in the United States – up from number 28 in 2016 and ahead of seven other Los Angeles-area restaurants on the list.

“I think it reflective of the commitment my family has to providing and delivering the highest quality hot dogs,” Pink said. “It’s a fun experience and you get a sense of history when you come to Pink’s. The ‘little hot dog stand that could’ has become part of the historic fabric of Los Angeles.”

The Hollywood Chamber of Commerce also recently recognized Pink’s Hot Dogs at its “Heroes of Hollywood” luncheon, which celebrated iconic establishments and individuals in the community.

“It is so significant to have a restaurant that has been around for 77 years in Los Angeles. It’s like an archeological find,” Pink added. “This is the Rolls Royce of hot dogs.”

Get your kosher dogs at Jeff’s Gourmet Sausages