Nine people were injured, including one critically, after a van driver allegedly ran a red light on July 30, struck another vehicle and careened onto a crowded patio at a Pico Boulevard restaurant. 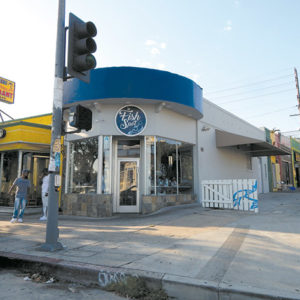 Nine people were injured when a driver allegedly ran a red light, collided with another vehicle and struck diners on a patio of the Fish Spot restaurant on Pico Boulevard. (photo by Edwin Folven)

The driver, Peter Goode, 38, allegedly ran from the scene but was held by bystanders until police arrived and took him into custody. Goode was booked for felony hit and run and suspicion of felony driving under the influence of alcohol or drugs, said Sgt. Ben Zucker, with the Los Angeles Police Department’s West Traffic Division.

The Los Angeles Fire Department responded at 3:47 p.m. to the collision in the 5100 block of West Pico Blvd., at the intersection with Redondo Boulevard. The injured victims were on the patio of the Fish Spot restaurant.

LAFD spokesman Brian Humphrey said the victims were taken by ambulances to multiple hospitals. A 44-year-old man was critically injured, a 30-year-old man and two women, ages 28 and 18, were taken to hospitals in serious condition. Three male victims, two 51 years old and the other 39, were hospitalized in fair condition, along with a female victim who was 29 years old. An off-duty LAFD firefighter who was at the restaurant when the collision occurred was slightly injured and treated at the scene, and did not require hospitalization.

Humphrey said firefighters and paramedics performed triage at the scene and the most seriously injured were transported first. The driver of the other vehicle that was struck by the van was not significantly injured.

Authorities do not believe the collision was intentional, Zucker said. Officer R. Yoshioka, of the West Traffic Division, said Tuesday that all of the victims are recovering and are expected to survive. The incident remains under investigation, Yoshioka added.

Anyone with information is asked to call detectives with the LAPD’s West Traffic Division at (213)473-0220.