“Newsies,” the Tony Award-winning broadway musical, is back by popular demand for special big screen showings at The El Capitan Theatre from Aug. 4-9.

Captured live at the Hollywood Pantages Theatre in 2016 and transformed onto the movie screen, the event stars Jeremy Jordan reprising his role as Jack Kelly.

“Our earlier engagement of ‘Newsies’ thrilled and galvanized our El Capitan Guests, and we are delighted to be the only theatre offering eight more showings of this audience favorite,” said Ed Collins, the El Capitan Theatre’s general manager. “This exhilarating Tony winner took New York and the country by storm and will do so at The El Capitan Theatre once again.” 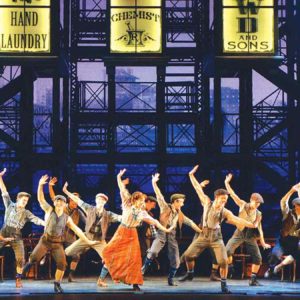 The show’s main character, Kelly, struggles to sell copies of the New York World on the streets of Manhattan.

When the World’s publisher, Joseph Pulitzer, raises the price that Kelly and his fellow “newsies” must pay for copies of the paper at the distribution center, the newsies go on strike.

The production is loosely based on the New York City Newsboys Strike of 1899, which lasted two weeks as local newspaper hawkers protested against the way they were being compensated.

Adult reserved tickets are $18. VIP tickets are $20, and include a preferred seat, popcorn in an El Capitan Theatre souvenir popcorn tub and a 20-ounce beverage.

Other events at the theater this summer include the Lion King Sing-Along, running from Aug. 4-20.

There will also be a one-night-only screening of the movie Tron, celebrating its 35th anniversary this year.

The El Capitan Theatre is located at 6838 Hollywood Blvd. For information, visit elcapitantickets.com.