New pedestrian-activated traffic signals will be installed at four intersections along Santa Monica Boulevard to make it safer for people to cross the street in one of West Hollywood’s busiest commercial districts. 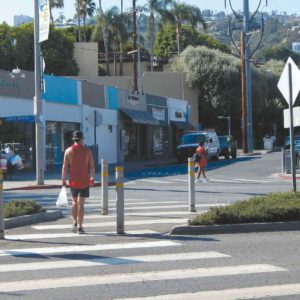 A pedestrian-activated traffic signal will be installed at Santa Monica Boulevard and Palm Avenue, one of four intersections along the boulevard designated for new signals.
(photo by Edwin Folven)

The new signals are part of a three-pronged approach to pedestrian safety between La Cienega and San Vicente boulevards, started by the West Hollywood City Council in 2014 known as “Engineering, Education and Enforcement.” The city considered ways to better regulate traffic flow while accommodating the needs of pedestrians, and created an educational campaign warning walkers, drivers and cyclists about the necessities of following rules of the road. The sheriff’s department also stepped up enforcement, and the city stationed mobile electronic message boards along the boulevard with alerts about the area being a pedestrian safety zone.

“Public safety is a top priority,” said Donn Uyeno, senior civil engineer for West Hollywood. “People will be able to cross when they are supposed to cross, and people can also drive through at a comfortable pace.”

Uyeno said the signal installation took nearly three years because of an extensive public input period, design phase and redesign period after city commissions and the City Council asked that plans be modified.

There are currently three full traffic signals on Santa Monica Boulevard at the intersections with La Cienega and San Vicente boulevards, and Westbourne Drive. The intersections where the new pedestrian-activated signals will be installed were already marked with continental crosswalk-style stripes.

“It will all be coordinated,” Uyeno added. “The traffic signals will have a flashing red light when they are crossing, which holds traffic. It also holds back pedestrians when cars are driving through. People will still push a button and the crosswalk has a walk/don’t walk sign. Having it synchronized (with other signals in the area) will make it a lot better for everybody.”

Some pedestrians who frequent the area said signalized crosswalks make them feel safer.

“A signal will make traffic stop and you don’t have to worry about whether they see you,” said Michael Masters, who visited West Hollywood on Monday. “Traffic is always heavy. I hope it makes crossing safer.”

The new signal installation began on July 10 and construction will last for three months, Uyeno said. The $1.17 million project also includes the installation of new curbs, gutters, ramps, sidewalks and signage near the intersections.

“By mid-September, it will all be done,” Uyeno said.