Certainly a third try at adapting Spider-Man is little more than a cash grab. Maybe, but wow, Sony’s decision to share the character’s reins with Marvel Studios provides us with an enlivened take on the classic character. Aptly titled, “Spider-Man: Homecoming,” this is a return to form for a superhero with a sordid history.

If world-ending doom bores you, fret not, here comes the Spider-Man, and he doesn’t traffic in that kind of dull trope. His villain isn’t a generic fill-in for evil, broadly defined. He’s a bitter middle-class worker. Following the events of “The Avengers,” Adrian Toomes’ (Michael Keaton) cleanup crew, contracted with the city, is forced out of its job thanks to Tony Stark’s (Robert Downey Jr.) new proposal for a special federal project, the Department of Damage Control.

Apparently, the debris from a superhuman showdown is too sensitive for civilians to handle, but all Toomes and his blue-collar men see is the man who creates the mess profiting from cleaning it up too. They’re not wrong. So Toomes decides to keep some of that alien tech he was once charged with collecting. 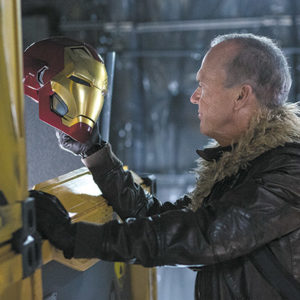 Michael Keaton’s portrayal of the villain in “Spider-Man: Homecoming” is a “breath of fresh air.” (photo courtesy of Sony Pictures)

Peter Parker resides in a very different world than his predecessors, one that looks a lot more like New York. In place of typical Hollywood casting, Peter’s high school is far more diverse. The majority of Peter’s classmates are non-white, and several compelling female leads, like senior crush and debate team captain Liz (Laura Harrier), grace the screen. That said, why the writers and director Jon Watts decide none of these ladies need to interact with each other is beyond annoying.

This is perhaps the closest we’ve come to a Spider-Man in line with the comics. He’s insecure but strong, ready to please but brash. And Holland’s performance is yet another notch in the Marvel bedpost for casting, both for his age, 21, ensuring a longer run in more films, and for a fresh take on the character filled with witty banter and comic timing.

Before superhero films forgot how to write good villains, Keaton’s Vulture would be dubbed a solid, albeit stock villain. Now, he’s a breath of fresh air. In place of a mad scientist or mystical creature hellbent on ending the world, he’s a more sympathetic foe. That’s the greatest lesson “Homecoming” learns from the Sam Raimi “Spider-Man” trilogy.

Some new moves it brings to the screen include an amazing supporting cast. Downey Jr. is back as Iron Man, along with his friend, Happy Hogan (Jon Favreau). In place of an aged Aunt May, Marisa Tomei rocks the part. Then there’s classmate Michelle, played hilariously by Zendaya, the Disney TV sensation. Beyond that, bit parts from other notable stars: Jennifer Connelly, Donald Glover, Hannibal Buress, Kenneth Choi, Martin Starr and Bokeem Woodbine.

Hats off to Jacob Batalon for his performance as Peter’s nerdy best friend Ned, who discovers Spidey’s secret early on. He handles it with the professionalism of an average high schooler fanboying all over the place.

Who knows if any dastardly producers have terrible ideas in mind when Spider-Man swings into action next, but for now we can all rest assured that “Homecoming” is more than regurgitation of the same character. A much more fun, lighter, neighborhood-friendly take on the character, we get to see Spidey as a high schooler before all that brooding kicks in. That’s a hero worth cheering for.