The California African American Museum announced that it will present four new exhibitions this summer.

They include a work by Gary Simmons, an exhibition that examines black silent films, a selection of portraiture from Los Angeles-area collections, and paintings and photographs by artists from the Caribbean and Brazil that comprise the museum’s latest permanent collection exhibition. 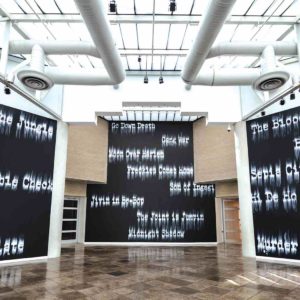 “This summer’s exhibitions and programs build on the momentum of CAAM’s new direction, and especially take advantage of summertime to welcome families, vacationers, and old and new friends of CAAM,” said George O. Davis, the museum’s executive director.

One of the exhibitions, “Center Stage: African American Women in Silent Race Films,” will be on display through Oct. 15.

“‘Center Stage’ considers pioneering African American filmmakers and production companies in the early 20th century that provided African American women the opportunity to participate in front of, and behind, the camera,” according to the museum. “They challenged disparaging portrayals of black women in Hollywood, and instead conveyed their wit, intelligence, and talent for largely black audiences to admire and emulate.”

Another exhibit, “Face to Face: Los Angeles Collects Portraiture,” will be on display through Oct. 8.

“In the age of social media, when the demand to represent our ‘selves’ has become a daily imperative, portraiture is mutating,” according to the museum. “Within the human face – the most familiar element of our identity – we glimpse some measure of a subject’s character, personal biography, social status, and emotion, as interpreted by the artist and communicated to us. Drawn entirely from LA-based collections, the over 50 works in this exhibition demonstrate changing approaches to portraiture from 1984 – CAAM’s founding – to today.”

Bid to name freeway after Obama rolls ahead

Jump at the chance to see the revitalized Ford Theatres