A 75-year-old man died in a structure fire on July 7 in a duplex in the 1100 block of South Sycamore Avenue, just south of Olympic Boulevard.

The Los Angeles Fire Department is investigating the exact cause of the fire. It appears to be accidental, with excessive storage being a contributing factor, said LAFD spokeswoman Margaret Stewart. 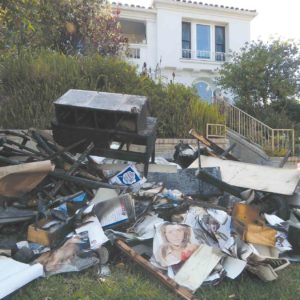 A resident died in a fire at a duplex on South Sycamore Avenue. Excessive storage may have been a factor in the cause of the fire.
(photo by Edwin Folven)

The fire occurred at approximately 3:50 a.m. on the ground floor of a two-story structure divided into upper and lower units. Smoke alarms sounded and residents in the upper unit called 911.

Firefighters arrived to find flames in the lower unit. The blaze was extinguished in 16 minutes.

The man who died lived in the unit with his 88-year-old uncle. Both men were taken to a hospital, where the younger man was pronounced dead. The 88 year old sustained smoke inhalation but is expected to survive, Stewart said. The decedent was not identified.

The residents in the upper unit were not injured. That unit was not damaged and the occupants were allowed to return. The monetary loss was not available.

Steward said it was the eleventh fatality so far this year in a structure fire in Los Angeles. There were 23 structure fire fatalities in 2016 and 11 in 2015. Stewart said the number is higher a little after the mid-point of 2017 because of a single fire in the Westlake District in late April in which five people died. That fire engulfed a vacant apartment building and neighboring house, and may have been caused by homeless individuals living inside.