LACMA debuts exhibit on Chagall’s works for the stage 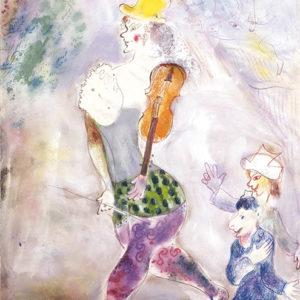 Numerous works by Chagall are included in the new exhibit opening at the end of July at LACMA. (photo © 2017 Artists Rights Society (ARS), New York/ADAGP, Paris)

The exhibit highlights the role that music and dance played in Chagall’s artistic practice. The performing arts were a significant source of inspiration for Chagall throughout his long career. He depicted musicians in many of his paintings, collaborated on set designs for the Ballet Russes in 1911, created murals and theatrical productions for the Moscow State Jewish Theater in the 1920s and designed costumes and monumental sets for ballet and opera from the 1940s through the 1960s.

The exhibition concentrates on Chagall’s four productions for the stage: the ballets “Aleko,” set to music by Pyotr Tchaikovsky (1942), “The Firebird” by Igor Stravinsky (1945), “Daphnis and Chloé” by Maurice Ravel (1958), and Wolfgang Amadeus Mozart’s opera “The Magic Flute” (1967).

The exhibition features the artist’s vibrant costumes and set designs, some of which have never been exhibited since they appeared on stage. It also includes a selection of paintings depicting musicians and lyrical scenes, numerous works on paper and documentary footage of original performances.