A new office building proposed at the corner of Sunset Boulevard and Bronson Avenue in Hollywood will be reduced by two stories under a settlement reached on June 22 in a lawsuit filed by the AIDS Healthcare Foundation (AHF) against developer Hudson Pacific Properties.

The building, known as Epic, was proposed to be 15 stories, but one level of office space and one level of parking has been eliminated under the settlement. It will be located at 5901 Sunset Blvd., near the iconic KTLA radio tower. 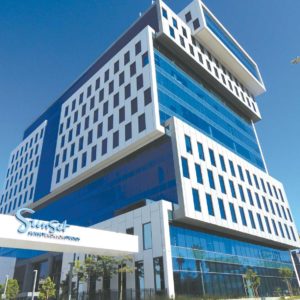 The proposed building is one of many Hudson Pacific Properties developments in the area, including the 11-acre Sunset Bronson Studios campus and a 14-story office building known as Icon at Sunset Boulevard and Van Ness Avenue.

Representatives of AHF called the settlement a victory against overdevelopment along Sunset Boulevard and in the surrounding community.

“We first filed suit to halt or scale back one more supersized development in the city of Los Angeles. We are largely pleased with the concessions and compromises that this scaled back design represents,” said AHF president Michael Weinstein. “We thank Sunset Studios for working together toward an alternative design that we believe is in the best interest of both the community surrounding 5901 Sunset as well as the city at large.”

Ged Kenslea, communications director for AHF, said the settlement is a victory beyond the reduction of two levels. The organization contended that a grocery store previously planned on the ground floor of the building in a space that will now be used for other retail would have brought an increase in traffic to the neighborhood. The building’s parking will also now be enclosed, as opposed to the previous open design, reducing the pollution from exhaust, Kenslea said.

AHF was one of the organizations behind Measure S – also known as the Neighborhood Integrity Initiative – a ballot initiative defeated by voters in March. The measure sought to reduce “overdevelopment” in the Los Angeles by imposing a moratorium on new construction, prohibiting amendments to the city’s general plan for certain projects and requiring more public review, among other requirements.

Kenslea said the Measure S campaign was successful in that it forced people to think about and reconsider the way new projects are designed and approved in the city. He said AHF was concerned overdevelopment was ruining the quality of life for residents in Hollywood and other parts of the city.

“It’s too much, too fast. City Hall was handing out zoning variances like candy,” Kenslea said. “While Measure S may have fallen short at the ballot box, the effect is being felt. People are paying attention to the issues of development and overdevelopment in the community and at City Hall.”

The settlement reduced the overall size of the Epic property to 268,850 square feet, and the height was reduced by 28 feet, to 206 feet from ground level. The height of the parking levels closest to the neighboring residents was reduced from nearly 50 feet, to 36.5 feet, and there is a 14-foot set back between the 36.5 foot first level and the remaining two parking levels.

Hudson Pacific Properties issued a statement about the settlement.

“This agreement moves forward a world-class project that will bring more good jobs and businesses to the city, and supports Hollywood’s continued resurgence as the epicenter of media and entertainment,” said Chris Barton, executive vice president of development and capital investment for Hudson Pacific Properties. “Epic is another significant investment in Hollywood by Hudson Pacific Properties and is part of our long-term commitment to the entire community.”