The Hammer Museum last week announced the appointment of Erin Christovale as assistant curator. She will co-curate the Hammer’s biennial exhibition “Made in L.A. 2018” with Anne Ellegood.

“Erin Christovale is an exciting addition to the Hammer’s curatorial team,” Anne Philbin, the Hammer’s director, said. “Her wide-ranging interests across film and other media will strengthen our ability to engage both new audiences and ideas. Erin has long advocated for under-recognized artists, and we’re pleased she will be working with us beyond ‘Made in L.A. 2018.’” 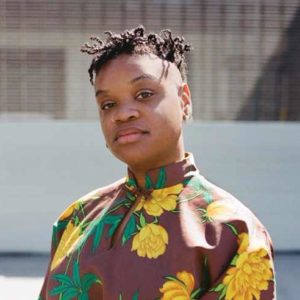 Erin Christovale has “long advocated for under-recognized artists,” according to Hammer director Anne Philbin.
(photo courtesy of the Hammer Museum)

Christovale is a curator and film programmer based in Los Angeles. She is the curator of Black Radical Imagination with Amir George, which has screened both nationally and internationally in spaces such as the Museo Taller Jose Clemente Orozco.

Exhibitions include “a/wake in the water: Meditations on Disaster” at the Museum of Contemporary African Diasporan Arts, “Memoirs of A Watermelon Woman” and “A Subtle Likeness” at the ONE National Gay and Lesbian Archives, and “S/Election: Democracy, Citizenship, Freedom” at the Los Angeles Municipal Art Gallery, where she previously served as curator. She is currently organizing the 28th anniversary of “Alternate Endings” with Vivian Crockett as part of Visual AIDS’ longstanding project, A Day With(Out) Art.