The family of Nancy Paulikas, a woman with Alzheimer’s disease who was last seen on Oct. 15 walking away from the Los Angeles County Museum of Art, has released a new age-enhanced photograph that shows her as she may now appear.

Paulikas’ husband Kirk Moody said the new photo will be used on postcards and mailed to 10,000 assisted living and senior care facilities in 10 Southern California counties with the hope that someone at the facilities recognizes Paulikas and notifies authorities. The 55-year-old woman was last seen by Moody and other family members at the museum on Oct. 15 at approximately 2:15 p.m. Paulikas went into a women’s restroom on the second floor of the Ahmanson Building, and Moody walked down one level to use a men’s restroom. When he returned, his wife was nowhere to be found. 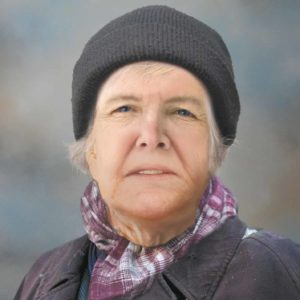 A photo of Nancy Paulikas that was enhanced to show how she might look now is being distributed with the hope someone will recognize her and notify authorities and family members.
(photo courtesy of phojoe.com)

Moody said Paulikas was diagnosed with early-onset Alzheimer’s disease and had difficulty speaking. Once the family realized she was missing, they notified museum staff and called police. Officers from the Wilshire Division canvassed the surrounding neighborhood but did not find Paulikas. Security camera footage showed Paulikas walking away from the museum west on Wilshire Boulevard toward McCarthy Vista/Crescent Heights Boulevard. It is estimated that the image was captured approximately 15 to 20 minutes after Moody last saw her.

“We have no idea where she might be,” Moody said. “We are doing anything we can to find her.”

The disappearance is being investigated by the Manhattan Beach Police Department because Moody and Paulikas live there. Moody formed a small army of friends and family members to search the surrounding neighborhood in the weeks after the disappearance – to no avail. Flyers were posted and the group searched places frequented by homeless people, hospitals, assisted living facilities and other locations where Paulikas may have gone. The family and police also check frequently with the Los Angeles County Coroner’s Office, which has not reported any “Jane Does” who match Paulikas’ description. Det. Michael Rosenberger, with the Manhattan Beach Police Department, said the working theory is Paulikas is lost somewhere in the system.

Moody said the effort to find Paulikas in hospitals and care facilities has sometimes been discouraging. Sometimes staff is happy to help and checks for the missing woman. But many other times, hospitals and facilities cite laws preventing them from sharing information about patients. Rosenberger has been involved in pressing some facilities to search for Paulikas. He also assists when tips come in that she was possibly seen on other security camera footage but businesses decline to provide the footage for viewing.

Moody said he is also working with the head of information technology for the Hospital Association of California, which disseminated the information about Paulikas to 300 hospitals and other agencies statewide. He also recently met with officials from the Los Angeles Department of Public Works, Bureau of Sanitation, who plan to provide workers who clean up homeless encampments with information and photographs that may help identify Paulikas. Moody and Rosenberger have also continued to research MediCal records to determine if someone is caring for the missing woman and stealing medical insurance payments.

Moody said the Los Angeles County Museum of Art has also agreed to host an evening in tribute to Paulikas on Sept. 23. It will include a screening of the short film “Chocolate” – about a woman who has early onset Alzheimer’s disease and wanders away from home, ending up in the homeless community in Los Angeles – as well as a video segment about Paulikas and the feature film “Still Alice.” Details and schedule are still being worked out, he added.

Moody said he is encouraged by a situation in March in Santa Barbara in which a 68-year-old missing woman was reunited with her family after 10 years. That woman suffered from memory loss and was homeless, but one day remembered her name and told authorities at a shelter where she was staying.

Paulikas is white, 5-feet-7-inches tall and 140 pounds with light brown and grey hair. She was last seen wearing a red print shirt, blue jeans and blue sneakers. A $30,000 reward has been offered for information that leads to Paulikas.