An explosion in an underground electrical vault in the 8500 block of Beverly Boulevard on July 7 slightly injured four people and shattered windows at two businesses.

The explosion occurred at approximately 12:57 p.m., according to the Los Angeles Fire Department. Windows were shattered at the Northern Café at 8459 Beverly Blvd. and at a neighboring office building. The explosion also caused a power outage that affected approximately 3,500 customers. Electrical power was restored in the surrounding area at 4:40 a.m. on July 8. 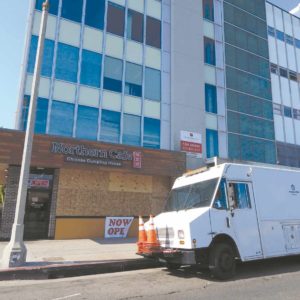 An explosion in an underground electrical vault near Beverly Boulevard and Alfred Street shattered windows at a nearby restaurant and office building.
(photo by Edwin Folven)

The electrical vault is operated by the Los Angeles Department of Water and Power (DWP) and houses equipment used to distribute electricity to customers in the Fairfax District. A previous power outage occurred in equipment in the vault on July 6 and crews repaired it by noon on July 7.

The second outage occurred shortly after the repairs were completed on a circuit in the same vault, which appears to have sustained damage during the earlier outage. The second outage affected businesses and residences in an approximately half-mile radius of vault, including Cedars-Sinai Medical Center and the Beverly Connection, which used generators for back-up power.

Paramedics arrived and treated the four victims at the scene. The victims, three men and one woman, declined to be taken to a hospital, according to Los Angeles Fire Department spokeswoman Margaret Stewart.

The cause of the explosion and the power outages remains under investigation, said DWP spokeswoman Kim Hughes.

Metro work near Fairfax through July 19