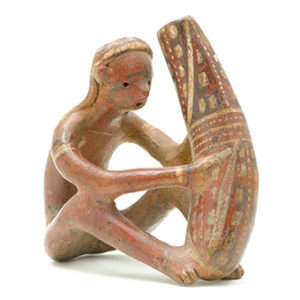 Figurines found in a Mayan tomb in Guatemala will be on display in the “Ancient Bodies: Archaeological Perspectives on Mesoamerican Figurines” exhibit at LACMA. (photo courtesy of LACMA)

The exhibit explores the role of archaeological excavation in positioning ancient art and artifacts in a cultural framework. In April 2006, archaeologists discovered a masonry tomb chamber while excavating a grand pyramid in the ancient Maya city of El Perú-Waka’, Petén, Guatemala. The tomb contained the remains of a ruler of the city and funerary objects selected to accompany the ruler into the afterlife. Among the objects was an elaborate scene composed of ceramic figurines depicting an ancient funerary ritual.

Mourners purposefully arranged the figurines in the tomb to tell a story, and archaeological excavation documented and preserved the story. This assemblage of 23 individual figurines is a compelling example of the critical importance of archaeological context, or provenience—the location of an object and its position relative to other objects. While each figurine is singularly expressive, their meaning and power are anchored in the story they tell together as a scene.