Couturier Gallery will present “L.A. NOIR: A City Reimagined,” an exhibition of black and white inkjet prints mannered in the style of noir, depicting famous architectural landmarks throughout Hollywood and the greater Los Angeles area, by photographer Ken Locker.

The exhibition runs from August 5-19 with an opening reception is on Aug. 5 from 6-8 p.m. and is open to the public.

“L.A. Noir” is Locker’s study of contemporary Los Angeles conjured through the surrealistic and portentous lens of the “noir” movies and literature of the 1930s, 40s and 50s. 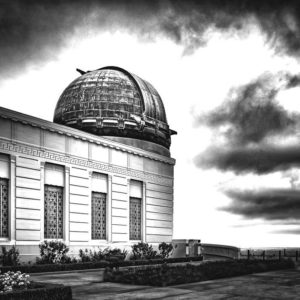 This 20-by-24-inch print of the Griffith Observatory will be among the works on display.
(photo courtesy of the Couturier Gallery)

The mood comes from taking away rather than adding. By shooting the scenes with neutral density filtering, removing the color digitally, and applying other manipulations, the images become a dreamlike dialogue between light and dark, provoking the feeling of unforeseen menace lurking around the corner.

Locker has had a diverse career in photography, documentary films, television and digital media.

Having studied at MIT’s Center for Advanced Visual Studies, he continued his fine art work in New York, exhibiting in several group shows at the Baltimore Museum of Art (1972), Johns Hopkins University (1972), MIT (1975), and Ferens Art Gallery (1977). Additionally, he worked in fashion, editorial and portrait photography.

Locker’s work, as an independent photographer, appeared in publications over the years such as The Guardian, Hollywood Reporter, New York Times, and the Wrap.

The Griffith Observatory and Chateau Marmont are some of the iconic Los Angeles Venues that will be on display in his works that will be featured in the exhibit.

The Couturier Gallery is located at 166 N. La Brea Ave.