Congress honors Gary Greene and his Big Band of Barristers 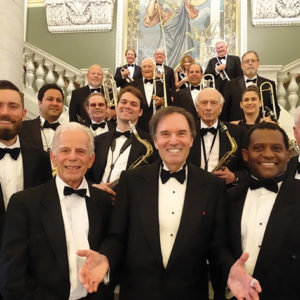 Gary Greene, Esq. & His Big Band of Barristers, an award-winning big band of lawyers, judges, law students and legal staff, received a standing ovation on July 14 after performing in the Great Hall of the Library of Congress in Washington, D.C.
The 18-member band, led by Greene, played classics from the Golden Era of Big Bands. According to library staff, a band of this size has not performed in the Great Hall in recent years.
Greene and his band were also honored by the United States Congress in conjunction with the performance. By day, the musicians are civil litigators, trial attorneys, in-house counsel, sole practitioners, partners at law firms, judges and justices, paralegals and law students. But by night, the concert stage is their “courtroom.” Members include conservatory graduates and professional musicians, as well as some musicians who only played in their youth.
Greene has offices at 9100 Wilshire Blvd. His musical groups rehearsed for many years until last fall in Wilshire United Methodist Church. For more information, visit LALawyersPhil.org.

The Taste of success at the Farmers Market

Paint with the mayor and artist Ed Massey in Beverly Hills