Tenant activists objected to one of the key metrics used by the city to approve the conversion, and to deny an appeal against it. A greater-than 5 percent vacancy rate for the surrounding area would have precluded the conversion, but city officials said it was below that threshold. 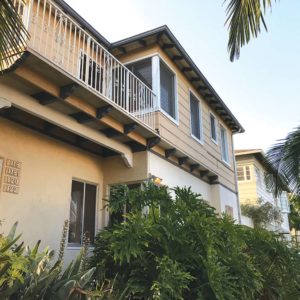 Residents of the property, located at 118-126 N. Flores St., had been evicted from their rental units through the Ellis Act.
(photo by Luke Harold)

Opponents to the City Council’s decision also viewed the condos as the latest setback in the ongoing housing crisis that has displaced residents and spiked homelessness. The property had been deemed historic, but renters were still evicted via the Ellis Act.

“We are facing an onslaught of condo-ization of affordable housing in our community,” said Adam Overton, a member of the L.A. Tenants Union. “We have a vacancy drought of epic proportions. We need to do everything in our power to make sure we retain rent-stabilized housing, or risk more families being displaced from their homes and communities.”

City officials arrived at an approximately 6 percent vacancy rate for the surrounding area based in part on Department of Water and Power meter data. But opponents said that information is nearly two years old, and that a UCLA researcher had been able to determine a 4 percent vacancy rate.

“You are destroying the balance of a city by only catering to rich people,” Amy Galaudet, a landlord and member of multiple homeowners’ associations, said. “You’re driving away the middle class, and you’re destroying the architecture. You’re ignoring the needs of the powerless over the powerful, and you’re changing the ecosystem of the city.”

The City Council also deemed that there was not enough of a “cumulative impact” on the surrounding area to justify denying the new condos.

“Within the context of escalating homelessness, rents and rent burden, there is no other possible conclusion than to recognize every loss of unit as a quantifiable cumulative impact that is not being mitigated, and exacerbating the crisis,” said Sylvie Shain, a tenant rights advocate.

Koretz said the conversion is a “difficult issue and somewhat muddy issue.”

“Given all the discussions we’ve been having about saving affordable housing, it would seem to resonate to go against [the applicant, Guy Penini],” he said. But he voted in favor of it because existing city rules, processes and methodology to arrive at the approximately 4 percent vacancy rate did not provide a basis to deny the conversion.

“As much as I’d like to,” Koretz continued, “I don’t believe it would be defensible to randomly pick a different calculation solely for this project. We should move forward, however, improving the data and methodology.

“If we’re going to move city policy toward preserving affordable housing – and we must – we’re not going to accomplish it on a case-by-case basis, where we’re dealing with awkward, and not very defensible, facts.”

Councilman Gil Cedillo, 1st District, said “the burden is for us to make that clear.”

“This matter is as clear as mud,” said Cedillo, who voted against allowing the conversion. “We don’t know, with respect to the criteria that serves as the basis for this appeal to be denied, that it has been met. There is no doubt that there is dispute over what the vacancy rate is in this city. We hear from academics, we hear from departments, we hear from DWP, and it is not clear whether or not we are above or below 5 percent.”

Councilman Mike Bonin, 11th District, was the other opposing vote.