The Beverly Hills City Council held a first reading of an ordinance prohibiting commercial cannabis in the city at its Tuesday meeting, in response to the passage of Proposition 64, legalizing recreational marijuana for people 21 and over.

The council will likely vote in favor of the ordinance at one of its two August meetings, according to Therese Kosterman, the city’s public information manager.

Marijuana dispensaries were already banned in Beverly Hills. With the passage of Proposition 64 in the November election, the City Council has been working to add to its current law by banning commercial cannabis activity such as cultivation, possession, manufacture and distribution. 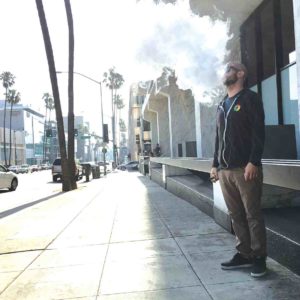 The City Council passed an ordinance earlier this year to ban smoking in public rights-of-way such as sidewalks. The new ordinance would prohibit commercial cannabis.
(photo by Gregory Cornfield)

The local law would still allow delivery of medical marijuana.

“This is the right thing to do for our community,” Beverly Hills Mayor Lili Bosse said.

A city staff report cited federal law, which outlaws medical and recreational marijuana use nationwide. Attorney General Jeff Sessions has indicated that he would like to crack down on marijuana related crime. Federal enforcement in recent years has taken into account the Cole Memo, issued by former Deputy Attorney General James Cole, which allows federal prosecutors to decline prosecution of federal marijuana violations if they occur in a state with a “strong and effective regulatory and enforcement system.”

Last year, 64 percent of voters in Beverly Hills approved Proposition 64, compared to 57 percent statewide. Since January, city officials have been working to craft local laws that would be “as restrictive as possible under the new regulations.” Despite the support from Beverly Hills residents in the election, the staff report calls into question whether they would welcome commercial cannabis.

The new ordinance has been through the Planning and Health and Safety commissions before arriving in front of the City Council.

Other concerns cited by city staff were banking issues that cause many dispensaries to only accept cash. As a result, they have attracted robberies, although evaluations of dispensaries and crime depend on the context.

A study published in the July issue of the Journal of Urban Economics concluded that medical marijuana dispensaries reduce crime in their immediate areas.

“Contrary to popular wisdom, we found an immediate increase in crime around dispensaries ordered to close relative to those allowed to remain open,” said Mireille Jacobson, of The Paul Merage School of Business at UC Irvine.

An Ohio State University Study from April 2017, however, said that while areas immediately surrounding the dispensaries did not experience surges in crime, property crimes in adjacent neighborhoods were 84 percent higher than neighborhoods farther away from dispensaries.

During a Tuesday afternoon study session, council members also mentioned upticks in traffic accidents and hospitalization as a result of recreational marijuana legalization.

“It’s in the best interest of the city that we adopt this ordinance,” Vice Mayor Julian Gold said.

Councilman Lester Friedman added, “I don’t think it’s a Beverly Hills business we want to have in Beverly Hills.”

Bosse, who recently gained recognition in Miami at a mayoral conference for her Healthy City program, also mentioned the public health aspect. Marijuana can cause brain and respiratory problems, and there is conflicting research about lung cancer risks associated with marijuana smoking.

“Health is of foremost importance to me and for our community,” she said.

The West Hollywood City Council, by contrast, plans to vote later this year on an ordinance that would regulate commercial cannabis. Other cities in the county are also working to implement new policies by the time recreational sales are allowed to begin on Jan. 1.

Earlier this year laws prohibiting smoking within 20 feet of open-air dining, as well as in the publics right-of-way such as sidewalks, alleyways and streets, except while passing by. The ordinance included e-cigarettes and marijuana.

Meet local law enforcement in WeHo at ‘Coffee With a Cop’