The city of Beverly Hills and the Beverly Hills Unified School District have agreed to a two-month extension to their Joint Powers Agreement, which allows for city usage of district facilities.

The agreement, formed in 1978, provides for over 90 hours of community use every day, according to the city. Its current terms were set to expire on June 30. A Joint Powers Agreement allows public entities to form partnerships for programs and services, among other possible functions. 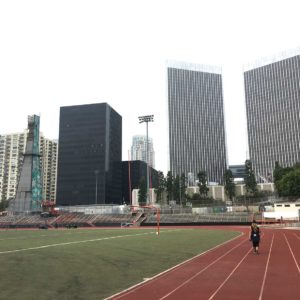 The track and field at Beverly Hills High School have been used for a number of programs under the Joint Powers Agreement.
(photo by Gregory Cornfield)

Mayor Lili Bosse said via email that she hopes the two sides will reach a long-term agreement before the extension expires.

“I am extremely optimistic and hopeful that we will reach a positive outcome within the two-month extension,” she said. “The city and schools have always had a wonderful partnership and I know we will reach a win-win for both.”

The City Council met last week to discuss the possibility of a six-month extension. The district had publicly stated it was seeking a one-year extension. The two sides agreed on two months as they review more information.

“I suggested that the council needed the ability to review and analyze their financial analysis, which had not been provided, but [board of education member Howard Goldstein] assured me it would be right away,” Bosse said. “I felt that once the council received that, we would be able to work together toward our mutual goal of completing the JPA negotiation.”

According to the agreement’s current terms, the city pays the school district a base amount of $9.7 million per year, as well as $125,000 for crossing guards around the schools.

After-school enrichment classes at the district’s four K-8 schools, aquatics classes at the high school’s pool, Beverly Hills Little League at school baseball fields and adult classes in high school classrooms have been made possible by the Joint Powers Agreement.

The district’s board of education approved the two-month extension at a June 30 special meeting, according to a district news release. The extension, running through Aug. 31, allows summer programs at school facilities to remain intact.

“I am optimistic that BHUSD and the city can successfully negotiate a mutually beneficial agreement that supports community opportunities, as well as the increasing costs of running such robust programming,” Superintendent Michael Bregy said in a statement.

In an open letter to the community late last month, Bregy quoted a passage in a July 2008 issues of “Beverly Hills: In Focus” highlighting the value of the agreement.

“In light of Beverly Hills’ limited open space, this is an important contribution to the well-being of the community,” the passage read. “The city depends on BHUSD facilities, buildings and athletic fields to further its mission in providing residents with recreation and green spaces for camps, sports, concerts, adult programs, aquatic classes and pre-schools.”

His letter also asked for increased funding through the Joint Powers Agreement to compensate for 2012, when the district agreed to a reduced amount due to the city’s budgetary constraints.

“BHUSD is asking the city to increase the JPA to $13.5 million [in a potential one-year extension] to recoup the $2.4 million reduction over the past five years, and to cover increased costs of facility operations over the past decade,” the letter said.

Bregy and City Manager Mahdi Aluzri were scheduled to meet on July 5 to discuss next steps, according to the district.