Who says you can’t love a storyless film for its style and soundtrack? That’s the real question driving “Baby Driver,” the most original heist flick in decades. This one easily nears the top of the summer season, but as an Edgar Wright film, “Baby Driver” is the man’s weakest theatrical release to date.

Baby (Ansel Elgort) is the best getaway driver out there. He doesn’t enjoy a life of crime, but he owes Doc (Kevin Spacey) a debt, so the pair team up for a series of jobs until they’re square. At least he gets to work with colorful characters like Griff (Jon Bernthal), Buddy (Jon Hamm), Darling (Eiza González) and Bats (Jamie Foxx), a wildly unhinged villain. 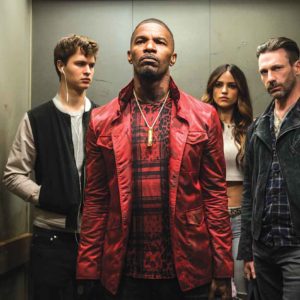 Sure, Baby loves driving, and he does so effectively to a good track on his iPod – he has a different one for each mood – but he’d rather hit the road with his gal, Debora (Lily James). Too bad fate rarely works in this protagonist’s favor, much to the dismay of his foster dad Joseph (CJ Jones), who easily steals the show.

All the hype surrounding this one steers one way: “Baby Driver” puts the fun in overdrive, setting a new standard for original filmmaking. I’ll agree that it’s original, but mostly, it’s a rather straightforward film hardly worth freaking out over. There’s a lot of heart and excessive style – something Wright does incredibly well – but it’s just not a very entertaining experience.

I want to love it. I’ll see anything with Wright’s name attached. “Shaun of the Dead,” “Hot Fuzz,” “The World’s End,” “Scott Pilgrim vs. the World” – his directing career is modest, controlled, but everything he creates exudes a love for film history and an incomparable wit most viewers won’t expect in genre flicks.

When Wright left “Ant-Man” as director, I wept. I knew that film would become a watered-down version of something more lasting. His presence is that powerful in any project. But “Baby Driver” is underwhelming. Stay for the soundtrack, and it’s a doozy of ear candy, but the story and characters are tedious.

Foxx, as Bats, has never been this annoying. And Spacey’s Doc quickly transitions from threatening Baby to sympathizing with him, all for a nice and tidy third act. The only character with an adequate arc is Buddy, and even then, it’s not a great a one.

And then there’s Baby, wearing his Freudian backstory in the most caricatured of ways. The name doesn’t work for the character and damages the film, but more than anything else, our star Elgort is not the second coming. He’s appeared in a few high-profile films like “The Fault in Our Stars,” and he’s just as vanilla here. No amount of music can compensate for that.

I scratch my head when I think about praise for the car chase scenes, always at the expense of the “Fast and Furious” films (unjustly so for at least three of those films). Sorry folks, the best automotive moments appear during the opening credits, including that special 300-move around a couple trucks in an alley you might’ve seen in the trailers. Otherwise, the action is rather bland and at one point, random. Let’s not forget the hero during the second heist who fights back with a sidearm in his truck (believable) and a machine gun (no clue where that came from).

Like Chris Christie on his shutdown beach, I know I’m alone. This happened last year at least once with “La La Land,” a film most found inspiring, while I perceived it as proficiently made but hardly worth celebrating. That’s “Baby Driver,” a film worth renting and using as an example in a film editing class. Other than that, I’ve seen better this month, this year.

Perhaps I’m off base. The first time I watched “Hot Fuzz” I cared little about it. Now, it’s yearly viewing. Eventually, I gained appreciation for Wright’s approach to genre and satire. As of now, I don’t see that happening with “Baby Driver.” While I appreciate a well-placed song, especially beautifully constructed cinematic moments all seamlessly cued, I have little commitment to or concern for music history when I watch a film. And without music, this isn’t a very memorable film.