A ‘golden opportunity’ for L.A. and Paris

The International Olympic Committee (IOC) announced on Tuesday that it will seek an agreement between Los Angeles and Paris to simultaneously award the host cities for the 2024 and 2028 Summer Olympic and Paralympic Games later this year.

If the IOC cannot reach an agreement to award the 2024 and 2028 Games this year, it will follow its traditional format and award only the 2024 Games. 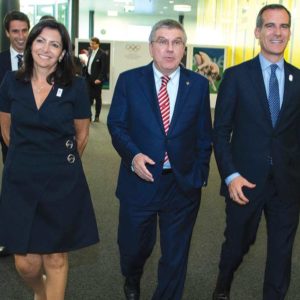 “In Olympic history, there’s only been 37 times in which there has been a tie for a gold medal. Maybe today is the 38th,” Los Angeles Mayor Eric Garcetti said in a statement. “For Los Angeles, it’s a golden opportunity, one that we don’t take lightly.”

LA 2024, the city’s Olympic exploratory committee, said the IOC decision is “a proud day for Los Angeles and for the Olympic and Paralympic movements in America.

“We’re thrilled with the IOC’s decision today, which is a major step forward in making L.A.’s Olympic dream a reality,” the statement read. “Today, two of the world’s greatest cities, with outstanding but different proposals, stand ready to serve and advance the Olympic and Paralympic movements and their values. We look forward to working with the IOC and Paris in the weeks ahead to turn this golden opportunity into a golden future together.”

Los Angeles Councilman Mitch O’Farrell, 13th District, said previously that a dual bid might favor Paris because of the centennial element, since Paris hosted in 1924. But, O’Farrell noted, Athens, which hosted the 1896 Games, lost its 1996 bid to Atlanta.

“It’s great news that the Olympics are returning to Los Angeles,” O’Farrell said via email. “The city will be ready, whether we host the event in 2024 or 2028, and I look forward to helping set the stage for a successful, financially sound, and safe Summer Olympic Games.”

Los Angeles officials said earlier this year, when the idea for a dual bid first surfaced, that the city was focused only on winning the 2024 bid. Logistical issues, such as coordinating sponsorships, were among the reasons why O’Farrell said there would be a level of difficultly transposing the city’s 2024 Games plan to 2028.

Members of the city’s Ad Hoc Olympic Committee, of which O’Farrell is a member, have been optimistic that L.A.’s plans to use existing facilities, as it did for the 1984 Games, would help ensure that the city turns a profit. One of the struggles of the Olympic movement that has deterred cities around the world from bidding has been cost overruns. L.A. turned a $223 million profit in the 1984 Games, and some of the money was used to support youth sports programs throughout the county. Council members on the Olympic Committee have said they would want profits from any future games in L.A. to be used for similar purposes.

Garcetti made an appearance with Paris Mayor Anne Hidalgo before the IOC members.

“I am fully committed with the Paris team to putting all my energy, our creativity and my resolve into reaching an agreement for Paris to experience once again this Olympic adventure that it has been longing for 100 years,” Hidalgo said in a statement.

French President Emmanuel Macron indicated his support for the dual bid before the IOC vote.

“We are ready to work with them on this ‘win-win-win’ approach,” Macron said in a statement.

“We look forward to working with our partners in L.A., our friends in Paris and the IOC administration to make the dream of bringing the Games back to the United States a reality,” he said.