76 gas station to be converted into apartments, restaurant space

A new apartment complex and restaurant space is proposed on a parcel at the corner of Highland and Melrose avenues where a former Union 76 gas station was located. 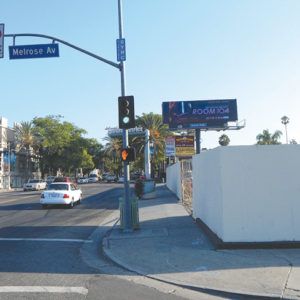 The 76 gas station at the corner of Melrose and Highland avenues has been demolished to make way for apartments and a restaurant. Behind the location is a strip mall housing Petit Trois and Trois Mec, located in the former Rafallo’s Pizza restaurant. Few details have emerged on plans for the site. (photo by Edwin Folven)

The Los Angeles Department of Building and Safety (LADBS) issued demolition permits for the gas station in May, and the building was subsequently demolished and the lot was cleared. On July 17, LADBS issued a permit to build a three-story, mixed-use development with 19 apartments over ground-level restaurant space.

The owner/developer of the project is not listed by LADBS, and a spokeswoman from the Los Angeles Department of City Planning said no information has been submitted to them about the project at 6535 W. Melrose Ave.

It appears that the project is “by-right,” or does not need zoning changes, so the developer would not be required to go before the planning department.

The LADBS records show a permit was issued for the removal of fuel tanks at the site. A spokesman for LADBS had no further information about the proposed project. The application lists the designer as Jay Vanos Architects, located at 1733 S. La Cienega Blvd. A call to the firm was not returned.

Estevan Montemayor, communications director for Councilman David Ryu, 4th District, said he was unaware of specifically what was planned at the site.