“The LGBT community has fought for decades to achieve basic nondiscrimination protections and I was proud of the progress made under the Obama Administration, which introduced a policy that would allow transgender individuals to openly serve in the military,” Schiff said, adding that the president is “catering to his extreme base ahead of the best interests of the military or basic principles of fairness and decency.” 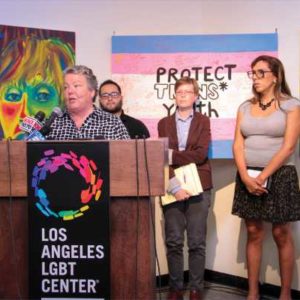 Lorri L. Jean, CEO of the Los Angeles LBGT Center, was one of many local officials to denounce the president over tweets that said he will ban transgender military personnel.

Last year, the secretary of defense under former President Barack Obama, Ashton Carter, announced that transgender citizens would be allowed to serve openly in the military. The decision continued the progress made after the 2011 repeal of “Don’t Ask, Don’t Tell,” a policy passed under former President Bill Clinton that banned openly gay, lesbian or bisexual citizens from serving in the military.

Carter instituted a year-long review to determine how the military would accept transgender recruits. Trump’s secretary of defense, Jim Mattis, announced in a memo that he would delay those plans.

A report commissioned by the Department of Defense, published last year, estimated that there were approximately 1,320 to 6,630 transgender people already in the military. It said the costs of health care, one of the concerns Trump mentioned in a series of tweets, would be “relatively low” for gender transition-related costs – but not all transgender people in the military would seek treatments for gender transition.

“Thousands of transgender Americans are already in the military,” Lieu said. “Why? Because they are qualified, patriotic and willing to die for their country. There is zero evidence a transgender sniper would be any less qualified than a gay sniper or a straight sniper. Today is a sad day for America.”

Los Angeles Mayor Eric Garcetti said in a statement that all “patriotic, courageous and selfless” citizens wishing to enter the military should have the opportunity.

“The president’s decision to bar transgender Americans from military service is at odds with the values of freedom and equality that our men and women in uniform fight for every day,” Garcetti said.

The Republican Party of Los Angeles County did not immediately respond to a request for comment, but outrage continued to pour in from local Democrats.

Los Angeles Councilman Mitch O’Farrell, 13th District, said in a series of tweets that the president’s decision has made the country “less safe.”

Those you oppress will be the cause of your downfall. You have “outed” your own wretched soul for the world to see & humanity disapproves. https://t.co/Qy4P3gGPwD

“Those you oppress will be the cause of your downfall,” he said. “You have ‘outed’ your own wretched soul for the world to see and humanity disapproves.”

Lorri L. Jean, CEO of the Los Angeles LGBT Center, spoke against the ban in a press conference Wednesday morning.

“It is not enough for Republican Party leaders to issue statements against the president’s announcement,” she said. “Republicans and Democrats alike must rise up across the country in opposition to a President who would take us back and impose discrimination and bigotry rather than upholding our Constitution’s promise of equality and justice for all.”

Landlords and tenants hash it out in Beverly Hills