The new law gives an exemption to “condominium type buildings,” after many of the city’s condo owners were concerned that they might not be able to afford the retrofitting. City Councilman John Duran said the new law took their concerns into account while bringing “as much of the city into compliance as we possibly can.”

“The reality is we do have office towers along the Sunset Strip, we have hotels that were built in the 1920s, and some in the 1950s, none of which were built according to modern day standards,” Duran said. “The loss of human life could be very great if one of our hotels collapsed, or an office tower collapsed.” 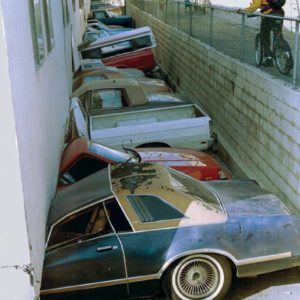 The new laws add to the council’s previous vote to protect soft-story collapses, such as the one pictured above from the 1994 Northridge Earthquake.
(photo courtesy of Pressbook Sites)

One of the building types that will require retrofitting, non-ductile concrete buildings, is vulnerable to earthquake damage because its concrete columns can’t bend, according to a city staff report. Steel reinforcing bars can make the columns stronger and more flexible. The other building type, pre-Northridge steel moment frame buildings, have been known to experience “brittle fractures” during earthquakes, according to city staff.

The City Council also encouraged residents to take their own emergency preparedness measures, such as keeping a supply of water, protein bars and canned goods.

“Most people in West Hollywood like to eat out and have nothing in their refrigerator, including myself,” Duran said. “But just know that if and when it happens, you’ll be on your own for three to four days. We won’t have much of government here to assist you for three to four days, so look at those earthquake shelves one more time and make sure you’re fully stocked.”

The staff report provides a timeline for owners to comply with the new retrofitting requirements – ranging from three years to submit an engineering report and recognize all deficiencies, to 10 years to complete “major deficiency mitigation,” to 20 years to finish all retrofitting work.

Bringing all the city’s buildings into compliance with the latest retrofitting requirements will take more time, with concerns over costs incurred by homeowners still to be addressed. Buildings that are exempt from retrofitting are still required to submit an engineering report, according to city staff.

“I’m concerned for all of the buildings we have in our city, and I’m an advocate for doing this work,” Councilman John D’Amico said. “I think some of the concerns are well founded. I think other concerns about cost and likelihood and probability are not quite aligned, but I think it is wise to leave this up to the individual building owners to make those decisions.”

“The cost would really bankrupt many homeowners in many buildings,” Mayor John Heilman added.

Earlier this year, West Hollywood implemented retrofit provisions for soft-story structures, which are buildings that use the ground level for parking or other types of open space. San Francisco, Berkeley, Los Angeles and Santa Monica are among the growing list of cities that have taken steps to protect vulnerable buildings.

The City Council’s unanimous vote took place days after the state Department of Conservation’s July 13 announcement of preliminary revisions to maps of earthquake fault zones in cities including West Hollywood, Beverly Hills and Los Angeles. The department will solicit public comment over the next few months before the revisions are finalized.

At the federal level, a House of Representatives subcommittee voted last week to continue funding a West Coast early warning system that President Donald J. Trump wanted to cut in his proposed budget.

Rep. Adam Schiff (D-Burbank) said in a statement that the vote by the subcommittee, led by Rep. Ken Calvert, was “a rare sign of bipartisanship in Washington.”

“In rebuffing the president’s request to eliminate funding for the system, Congress is showing its strong support for the system will not wane,” Schiff said.