Thank the gods. “Wonder Woman” isn’t just a success, it soars to splendid heights worthy of the highest praise in the entire genre. Proceeded by awful or mediocre films in the DC Extended Universe, we can now see the dawn through years of darkness, and I’m glad to be wrong about how good this film would be.

This isn’t Lynda Carter’s “Wonder Woman.” Replacing the corny stars-and-stripes costume with a sleek outfit more befitting an Amazon from the secret island of Themyscira, created by Zeus himself, this Wonder Woman (Gal Gadot) flies into action as a warrior unparalleled thanks to centuries of training and a destiny hidden from her until now. 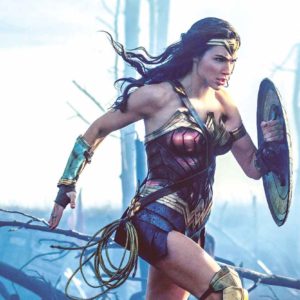 If you want a hyper-sexualized depiction of women, there’s always a “Transformers” film on the horizon for that. Princess Diana is different in many ways. Just how different her mother Queen Hippolyte (Connie Nielsen) and aunt General Antiop (Robin Wright) won’t say. Those questions will have to wait, though, as an unexpected guest, Capt. Steve Trevor (Chris Pine), crashes near the shore, informing the isolated Amazon warriors of “the war to end all wars,” occurring in Europe.

Is it World War II? Nope, Captain America saves that day. World War I could end soon if the accord holds. But Diana has a theory: Ares, the god of war, is behind it all. She has no proof, but the princess believes bringing him down will end the violence worldwide, so she embarks on a mission to the frontline of the war, helping Trevor thwart chemical experiments overseen by Gen. Erich Ludendorff (Danny Huston) and Isabel Maru (Elena Anaya), Doctor Poison to those who know her work.

Calling “Wonder Woman” a gamble because superheroine films tank is terrible reasoning oft employed by industry insiders. Apparently the failures of “Elektra” and “Catwoman” mean we should abandon the entire idea. That list is small, marking superheroine films as a largely untapped resource, one that needs to happen.

Rather than ignore gender through a generic action film, “Wonder Woman” acknowledges gender without turning the princess of the Amazons into a fantasy stripped of deeper meaning. In the Western world, Princess Diana finds women are placed in subservient roles. Perhaps the most enjoyable moments in the film occur when Wonder Woman tries to understand European social norms, like learned gender expectants, along with more comical moments like walking around London with a sword and shield.

To be honest, “Wonder Woman” had a lot going against it: DC’s embarrassing reputation of late, studio rumors of a troubled production, difficulty nailing down a director and a writing credit by Zack Snyder, the director of “Man of Steel” and “Batman v Superman,” who is known more for his visual prowess than narrative gifts.

But here we are, and the woman for the job is Patty Jenkins, who directed the 2003 film “Monster” followed by a slew of television episodes before returning to the big screen for a second time. May she never leave theaters again. This is now the most profitable film directed by a woman, and we should all be asking, “Why did it take this long?” We know why – we just don’t want to say it out loud lest some naive man-child label us social justice warriors, as if caring about equality and resisting dominance makes you the mutated spawn of Marx.

Already the trolls and sexist critics have risen from the shadow of an unread Ann Coulter paperback to declare “Wonder Woman” an example of politically correct filmmaking, something that’s not American enough because of the superheroine’s wardrobe change, one that’s been in the works in the comics over the course of a decade if any naysayer wants to do any actual research.

“Wonder Woman” is a feminist story that doesn’t shy away from the roots of the most iconic superheroine in comics history. It’s also a great piece of filmmaking complete with sensational action sequences and some original contributions to the superhero mythos.

Are the action sequences perfect? Hardly, but that was the same complaint about “Batman Begins,” and Diana Prince’s (a Westernized name Trevor gives her to blend in) blockbusting origin story is lightyears better than that one.

“Wonder Woman” is top 10 material worth watching and re-watching for years to come. This bold, brazen superhero film champions the most poetic aspects of the genre – heroic legend, sacrifice, courage, visual moments worth immortalizing as marble statues – not despite a female lead but because this film calls attention to sex and gender in conscious ways.