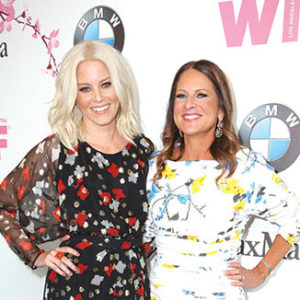 Elizabeth Banks, left, was a Crystal Award honoree at the 2017 Crystal + Lucy Awards on June 13. (photo courtesy of Getty Images)

The evening was hosted by actress and comedian Jessica Williams and raised funds and awareness for WIF and its many educational and philanthropic programs, as well as its advocacy for gender parity for women throughout the industry.

Founded in 1973, WIF focuses on advocacy and education, provides scholarships, grants and film finishing funds and works to preserve the legacies of all women working in the entertainment community.

The Crystal Award was established in 1977 to honor outstanding women who, through their endurance and the excellence of their work, have helped to expand the role of women within the entertainment industry.

The Lucy Award, founded in 1994, is named for Lucille Ball and is given to recognize women and men and their creative works that exemplify the extraordinary accomplishments she embodied.

Before Banks received the Crystal Award, she was surprised with a video message from Hillary Clinton.

In the video, Clinton thanked Women In Film for “more than 40 years of championing gender parity in media on and off the screen.”

“I want to congratulate my dear friend Elizabeth Banks,” she said. “You are not only a creative force in front of the camera and behind it – you are a passionate advocate for women’s equality and opportunity.”

Following Ross’ acceptance speech, she was surprised with a video message from Michelle Obama congratulating Ross.

“You are brilliant, you are hilarious, and you are one of the most talented actors I know,” Obama said. “Your character on ‘Black-ish,’ Bow, is an inspiration for folks across this country.”