The annual Broadway Dreams Summer Intensive running through Sunday at the Wallis Annenberg Center for the Performing Arts will include #cometogether, a June 24 public showcase that brings students and their mentors together on stage of the Bram Goldsmith Theater at 7:30 p.m.

The annual weeklong intensive invites future stars of the stage to embark on rigorous Broadway-caliber training – focusing on acting, vocal performance and dance – learning from the brightest and best industry professionals. 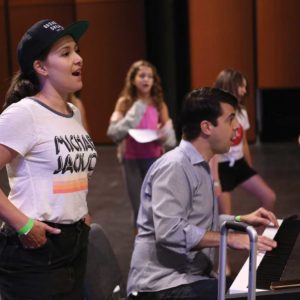 “The Wallis is thrilled to partner with Broadway Dreams to offer this exceptional program,” said Mark Slavkin, the Wallis’ Director of Education. “The training and the relationships formed are transformative in the development of artists of all ages.”

Annette Tanner, founder and president of Broadway Dreams, said she started the organization “with the belief that socio-economic background should not be a barrier for youth and young adults to pursue their interest in musical theatre and performance.”

“With the support of committed partners like The Wallis, we are able to provide performance training, life skills building and mentorship opportunities to tomorrow’s stars from today’s most distinguished talents.”

Broadway Dreams Foundation has a history of guiding students through their professional journies as young artists, giving them the tools, support and industry connections they need to succeed. Over the past several years, more than 50 of the foundation’s students have landed roles in Broadway, national touring and regional productions. Its students can currently be seen in the 2016 Tony Award-winning and nominated productions of “Hamilton,” “Waitress” and “Tuck Everlasting,” among others.

Tickets for #cometogether start at $25.

The Wallis Annenberg Center for the Performing Arts is located at 9390 N. Santa Monica Blvd.