When my friend Patricia Kara met the Consul General of Greece, Gregroy Karahalios, at an event in Los Angeles, she learned that one of his favorite Greek restaurants was Delphi Greek in Westwood Village. He told her that he was impressed with restaurateur Roozbeh Farahanipour and his passion and commitment for creating an authentic Greek experience with classic dishes in an inviting atmosphere. Farahanipour isn’t Greek, in fact, he and his family are from Iran. He has been a restaurant owner at this location in the Little Persia area since 1985. About 10 years ago, he starting focusing only on Greek food.

Karahalios invited Kara, me and a few of her friends to join him for dinner at Delphi Greek last week. We were greeted by Karahalios and Farahanipour, who offered me a glass of Malamatina retsina wine. I had never tried Retsina before and I tasted a hint of pine needles. The dry, light yellow wine gets its exciting piney flavor from the pine resin used to seal wine vessels. For over 2000 years, it’s been a popular drink in Greece, and the Malatamina brand has been around for more than 120 years. 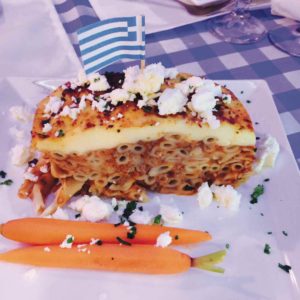 Pastitsio is made the traditional Greek way at Delphi Greek in Westwood.
(photo by Jill Weinlein)

Taking in the décor, the predominant colors in the restaurant are the same as the Greek flag – blue and white. There are checkered tablecloths and the walls are lined with Time magazine covers of famous Greeks – Spiro Agnew (his father was a Greek immigrant who shortened his name from Anagnostopoulos to Agnew when he arrived in the U.S.) and Aristotle Socrates Onassis, one of the world’s richest and most famous Greek men.

We ordered a skillet of saganaki, a hard white cheese that is doused with cognac, lit and blazed dramatically for a minute and softens. Cold appetizers in compartmentalized serving dishes included tzatziki, melitzanoslata (Greek eggplant dip), hummus, tabbouleh, Kalamata olives and slices of pita bread.

We passed around a plate of homemade dolmades – grape leaves filled with ground beef and rice. These were topped with avgolemono sauce.

Those who are familiar with Greek cuisine always talk about avgolemono soup. It’s like Greek penicillin, made with chicken broth, rice and finished with whipped egg and fresh lemon juice. At Delphi, it is pure comfort with every spoonful.

Kara raved about the pastitsio, which is like lasagna, yet made the Greek way with thick layers of small tube pasta mixed with fresh ground beef topped with a thick layer of bechamel sauce and feta cheese. It’s similar to a traditional moussaka made with eggplant and potato.

I’m glad I saved room for pastry chef Rana P. Farahanipour’s desserts. She makes everything from scratch. Her expertise is New York style cheesecake and chocolate cake, however she also makes a delicious galaktoboureko made with layers of crispy golden brown phyllo pastry sprinkled with melted butter and filled with a creamy semolina custard. She layers it in a pan and coats it with a clear, lightly sweet syrup.

The restaurant opens early for breakfast. The morning menu features egg dishes that include Delphi Paul Bunyan made with three eggs any style, three bacon strips, potato, gyro meat and your choice of white or wheat barbari (a thick Persian flat bread). They also prepare to order an array of omelets that include tomato, pepper, spinach and feta cheese; and one with onion, green pepper, tomato, feta cheese, avocado and gyro meat. A $10.99 lunch special includes a chicken filet panini with soup or salad; fresh fish of the day with basmati rice, vegetables and soup or salad; a gyro and a pork chop plate. A variety of pita wraps are under $10 too. Burgers include a Delphi burger topped with feta cheese, gyro meat and bacon.