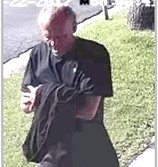 Police released a photograph of the suspect who assaulted an elderly man on Formosa Avenue.
(photo courtesy of the LAPD)

Officers from the Wilshire Division are still searching for a male suspect who assaulted an elderly man on May 22 in the 100 block of South Formosa Avenue.

Police released security camera photographs of the suspect, who police described as a transient. The violent incident was captured on video that was broadcast by television news stations. Investigators initially though the suspect would be easy to find, but he has eluded police.

“We got a lot of tips at first but the leads have died down,” said Det. K. Mayer, with the LAPD’s Wilshire Division. “The information was put out in a crime alert and we looked at places frequented by transients. Who knows where this guy is.”

The attack occurred at approximately 8:30 a.m. The victim was struck and kicked. It is unclear what provoked the assault.

The suspect was identified as black, approximately 40 years old, 6 feet tall and 150 pounds with gray hair. He was last seen fleeing on foot northbound on La Brea Avenue away from Oakwood Avenue.