The Los Angeles City Council unanimously voted to have city officials determine whether they can create a policy that would prohibit demolition of buildings under investigation for Ellis Act violations.

The vote was a result of a controversial demolition of residential units at 1332-1334 N. Formosa Avenue in Hollywood in January. Bulldozers partially demolished the building, despite a notice from the Los Angeles Department of Building and Safety posted outside ordering a stoppage of construction. 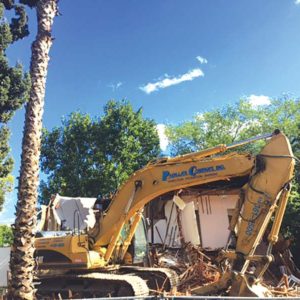 The units at 1332-1334 N. Formosa Ave. were demolished in January.
(photo courtesy of Richard Koehler)

The permit had been revoked due to allegations that the property’s units were being illegally used for short-term rentals via the short-term rental website Airbnb. The city’s Housing and Community Investment Department (HCID) said in an email to residents at the time that it would “review evidence and all options available to the city.”

But a little more than one week later, HCID announced that it had reinstated the permit because it did not find any reason to prevent demolition on Ellis Act grounds.

City officials announced that they were investigating whether to issue any penalties for the demolition. The property is owned by Belmond Homes LP and managed by Wiseman Residential.

The property on Formosa Avenue is the subject of a lawsuit filed on Jan. 3 by the nonprofit Eviction Defense Network on behalf of six former tenants of those buildings, according to a complaint filed with the Superior Court of Los Angeles. It names Belmond, Wiseman and Airbnb as defendants for their role in allegedly violating the law by re-renting the evicted tenants’ units so quickly.

Benjamin Cohanzad, a representative of Wiseman Residential, has denied that there has been any wrongdoing involving those units.

“It has been reported that landlords and developers are taking advantage of the time between when evicted tenants leave an Ellis Act building and when the buildings are converted to for sale housing, to re-rent as short term rentals – a violation of both the Ellis Act and current zoning codes,” according to Ryu’s original motion.

Death of St. Vincent Meals on Wheels founder mourned by many