Saban Community Clinic honored reality T.V. producer Cris Abrego for his philanthropic leadership at its second annual Let’s Get Real event on June 6 at the Jonathan Club in Santa Monica. 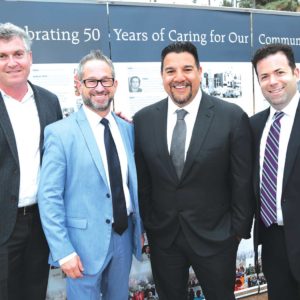 “The Saban Community Clinic is an incredible organization that offers so many amazing programs to people here in the greater Los Angeles area,” Abrego said. “I am truly honored to be a part of Let’s Get Real and to further support the terrific work being done by everyone at the clinic.”

Abrego oversees both the North American and Latin American divisions of Endemol Shine Group, the global independent content creator, producer and distributor, with a diverse portfolio of companies that are behind some of the most prominent hit television formats and series in the world. He has worked on hit reality shows “Big Brother,” “MasterChef,” “MasterChef Junior,” “The Biggest Loser,” and “The Surreal Life,” among others.

The event brought together more than 300 reality T.V. producers, executives and agents to raise much-needed funds for the clinic’s medical, dental and behavioral health services for low-income and uninsured families in Los Angeles. The clinic celebrates 50 years of caring for the community this year.

David Eilenberg, ITV Entertainment president, was one of the co-chairs of Let’s Get Real.

“We are proud to honor Cris at this year’s Let’s Get Real for being a champion for the patients Saban Community Clinic serves,” Eilenberg said. “Cris understands the health care hardships that many low-income residents of Los Angeles face and is committed to supporting the organization’s mission.”

The event also featured a special performance by actor and comedian Adam Ray, cast member in the reboot of the sketch comedy franchise “MADtv,” and last summer’s remake of “Ghostbusters” in which he voiced the character of Slimer.

Music in the Mansion hosting final show on June 23