Traffic congestion, loud music and large crowds carrying on into the early morning hours caused by so-called party houses have plagued neighborhoods throughout the Hollywood Hills for years. Whitley Heights resident Joyce Dyrector, for instance, said a Memorial Day party near her house caused a deluge of cars parked along the street that blocked her driveway.

She and her neighbors said they have been frustrated that the city has not been able to act faster to curb the number of obtrusive parties throughout the hills. 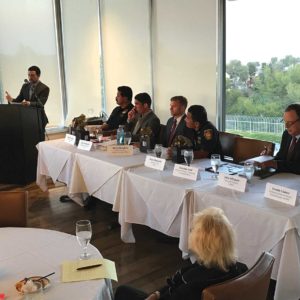 The Hollywood Hills West Neighborhood Council hosted a town hall at the Mulholland Tennis Club on June 12 for city officials to talk about the steps they’ve been taking to end the disturbances caused by party houses, and for residents to share their ongoing concerns.

A lack of a legal definition of a party house, and the fact that parties in private homes are not inherently illegal, sometimes complicate matters, according to Steve Houchin, a neighborhood prosecutor representing Hollywood.

The number of neighbors who report a given house can help them identify the more egregious offenders.

“It’s important that more than one person calls in,” he said, because it helps city officials “establish that it’s a public nuisance.”

“We really depend on your reporting in order to develop a case,” he said. “That’s where it all begins. … If that system is achieved, we’re going to have incredible success.”

Citations for noise and traffic are among the tools local law enforcement uses to discourage repeat offenses, according to Ralph Sanchez, an LAPD senior lead officer, but new party houses continue to emerge.

“For that one they close down, there are three or four others throughout the hills,” he said. “It’s hard.”

The popularity of short term vacation rental sites such as Airbnb have contributed to the increase in party houses. Upon entering office, Councilman David Ryu, 4th District, said he wanted to balance the positive economic gains websites such as Airbnb have contributed to the local economy ­– which, as of January, according to an Airbnb report, have totaled $13 million in taxes paid by Airbnb guests (and more than $30 million through the end of May, according to an Airbnb consultant) – with steps that make both sides happy.

Some of the more elaborate parties in the hills have included exotic animals, another related issue Ryu has addressed at City Hall.

On the legislative side, the Los Angeles City Council could vote on new laws that are still being hashed out between the city attorney’s office and at the committee level regarding short-term rentals in the next week or two, according to Nicholas Greif, director of policy and legislation for Council District 4. Not all party houses are short-term rentals, but they have contributed to the problem.

Connie Llanos, Airbnb’s California deputy policy manager, said residents should go to airbnb.com/neighbors to file a report if there’s a disturbance in the neighborhood caused by an Airbnb rental.

Not all short-term rentals are made via Airbnb, Llanos said, but the brand’s ubiquity in the market has made it synonymous with the practice. She said the company supports Los Angeles’ attempts to solve the problems through legislation in part because these issues have led to negative perceptions of Airbnb.

Some of the steps the neighborhood council encourages residents to take when disruptive parties occur include calling (877)ASK-LAPD to give the address of the party; taking photos, videos and sound recordings of the party – make sure they have date stamps – and uploading them to a Dropbox folder that can be shared among neighbors; and taking screenshots and saving the links to listings on Airbnb and similar sites that advertise local properties as “great for parties,” “perfect for large events,” etc.