Los Angeles has seen different iterations of the Pride Parade during the past four decades. This year, instead of a parade, it will be a protest march against oppression.
(photo by Alan Light)

Los Angeles will aim to make history on Sunday.

Thousands of people who are part of the “resistance” are expected to gather at Hollywood & Highland for what organizers hope becomes the region’s largest LGBTQ march ever, as well as a defining moment in the grander opposition mounting against the policies of the current White House administration.

The #ResistMarch will take the place of the 2017 LA Pride Parade, and supporters are calling on anyone who believes “America’s strength is its diversity” and cares about civil rights – not just for LGBTQ people, but for all Americans. The Sunday of Pride weekend, which is typically remembered for colorful floats and choreographed dancing in the annual parade, will instead feature political-protest signs and rehearsed chants in the #ResistMarch.

Councilman Mitch O’Farrell, whose district includes Hollywood, said with President Donald J. Trump’s administration “brazenly on record” as being anti-Muslim, anti-immigrant, misogynistic, homophobic, anti-intellectual, anti-environmentalist – “the list goes on” – that the development of the resistance has become a watershed moment for all Americans.

“In the next handful of years we will really learn what this country is all about, who we are, and what we’re going to be,” said O’Farrell, one of two openly gay council members in Los Angeles. “The demonstration of resistance is much larger than just an LGBTQ march.”

After the first LA Pride Parade was held in Hollywood in 1970, it became an annual celebration of the history of the fight for LGBTQ equality and awareness, and a point of honor for individuals coming “out of the closet.” The parade has evolved significantly over the years to become a weekend-long festival, and moved to West Hollywood.

Last year, Christopher Street West (CSW) – the nonprofit that organizes the LA Pride Festival – wanted to push a “music festival” brand to secure millennials’ interest. But opposition mounted with threats to boycott, and critics said the fight for LGBTQ equality was being overshadowed by commercialization, which forced CSW to pull back.

But then Trump was elected president of the United States, which both altered the political climate and united the focus of the groups involved with the festival. In response, the festival’s organizers are returning to their roots on Sunday by creating a protest march that is focused on ensuring the future of LGBTQ people, which includes Muslims, immigrants, women, intellectuals, environmentalists, “the list goes on,” O’Farrell said.

The #ResistMarch mission states that when “any American’s rights are under threat, all our rights are threatened,” and explains that the LGBTQ community includes “people of color, people of different faiths, people of all genders and no gender, immigrants, dreamers, people with disabilities, parents, allies.” 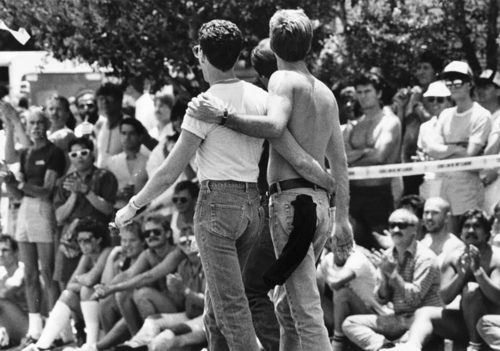 A couple walks together at the LA Pride Parade in 1984.
(photo by Mike Sergieff/courtesy Herald-Examiner Collection/Los Angeles Public Library)

“But most of all, we are American,” the mission statement read. “Yet our rights are in jeopardy.”

Further, O’Farrell said the #ResistMarch is an opportunity for the LGBTQ community to share in solidarity with all groups that have been oppressed in the past, and an “opportunity as never before to form allies.” And rather than succumbing to hatred or intolerance, he said the resistance is an opportunity for all Americans to turn anger into constructive activism, to emerge from the “dark days” of the “lunatic in the White House,” and become a better country in the long-term.

“It’s much larger,” he said. “It’s marching for the values in the Constitution that the current administration still must adhere to.”

Lorri L. Jean, CEO of the Los Angeles LGBT Center, said it is completely appropriate now to host a march that has a more political message. She said Trump’s election and his campaign were filled with direct threats against the LGBTQ community, as well as indirect threats to the community through healthcare and immigration.

She said the #ResistMarch is a call to return to the roots of the fight for all equality, but added that the event will also be focused on LGBTQ rights and act as both a celebration of self pride and protest against oppression.

“It was always both,” she said. “Celebrating who we are are is an act of defiance. … No matter how bad we think it is right now, it is still important we celebrate who we are. It’s key to our strengths.”

Andy Sacher, founding executive and creative director of The Lavender Effect – a nonprofit project to advance the future of LGBTQ heritage and culture – said LGBTQ people’s visibility has never been greater, and yet “many people are living in fear and hopelessness.”

“Though we have made enormous strides over the past half-century, homophobia still exists, and the global epidemic of disenfranchised gay teens continues,” Sacher said.

The #ResistMarch was inspired by the historic Women’s March on Jan. 21, which also received a boost by Trump’s rhetoric and policies. Emiliana Guereca and Deena Katz, executive directors of the Women’s March LA Foundation, said the Women’s March brought together 750,000 Angelenos on the streets of downtown Los Angeles to stand in solidarity for human rights and equality.

A Los Angeles-based entrepreneur, Brian Pendleton, saw the mass turnout, and initiated the idea for the #ResistMarch on social media.

“Floats and marching bands are nice when we are not at war,” Pendleton wrote on Facebook.

“We are not the ‘I got mine, so good luck getting yours’ generation,” he wrote.

The city of West Hollywood paid approximately $1 million for LA Pride this year – after paying $658,000 last year – which includes activities and entertainment on Friday and Saturday. But the increased price will pay for security for the #ResistMarch. A little more than one year ago, the massacre at Pulse nightclub in Orlando stoked fears of an additional attack on the LGBTQ community.

Other supporters and sponsors include NCJW/LA, Planned Parenthood and the Coalition for Economic Survival.

Everything old is new again in West Hollywood