Learn to hate what you love with ‘Transformers: The Last Knight’

I take pride in nerd culture. It’s an addiction I transformed into an academic pathway, earning a Ph.D. and writing a dissertation titled “Superhero Fatigue: Unmasking the Visual, Aesthetic, and Transmedia Language of an Emerging Genre.”

I say this not to brag but to establish my cultural currency. This isn’t an outside observation but a personal ethnography. I care about this subject as an active participant.

So when critics cite every “Transformers” film as geekdom run amuck, I cringe. We are not to blame for this trash. 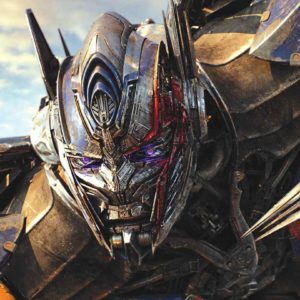 Optimus Prime’s mind is taken over by a sorceress of Cybertron.
(photo courtesy of Paramount Pictures)

If you ask a fan what the best Optimus Prime-lead story is, one clear choice arises: 1986’s “The Transformers: The Movie.” It had stakes, characters died. “Transformers: The Last Knight” isn’t the fault of a small group of diehard fans. The Comic Con crew doesn’t have that level of clout. Everyone is responsible. And by everyone, I mean that globally.

Here’s the gist (if anyone cares). While Optimus Prime (voiced by Peter Cullen) travels into deep space in search of the Transformers’ home world, Cybertron, more and more Autobots and Decepticons land on Earth, forcing the world to deem them all hostile forces in a thin and very underdeveloped jab at Trump’s xenophobia.

Oh yeah, apparently Megatron (no longer voiced by Hugo Weaving but Frank Welker) is alive, even though he died in the third film and a clone of him under a different name appeared in the fourth. But whatever, let’s just assume this all makes sense.

Cade Yeager (Mark Wahlberg) returns, no longer a hero but a terrorist protecting Autobots. He lives with them in an enormous junk car lot where the once dramatic T-rex Transformer, Grimlock, now acts like an oversized dog and somehow doesn’t appear in the final battle.

Meanwhile in space, a sorceress of Cybertron, Quintessa (Gemma Chan), takes control of Optimus’ mind and forces him to help transform Earth, or Unicron according to the Transformers, into the new Transformers home. Everything else, including a King Arthur backstory, is just another way to drag this all out to a painfully long runtime.

In films about robots, they always take a backseat to the less interesting terrestrials waltzing around, waxing juvenile. For 149 minutes, A-list names provide more robotic performances than their CGI counterparts. Wahlberg channels the same rubbish he brought to “The Happening.” Stanley Tucci doesn’t return as Joshua Joycea from “Extinction,” instead cameoing as a drunken Merlin (yes, that Merlin) shotgunning booze in one of many half-empty jokes. And Anthony Hopkins begins as our poetic narrator, Sir Edmund Burton.

But like most Michael Bay films, a pre-adolescent intern got a hold of the script for revisions and forced him to do such things as tell the prime minister of England to “shut up” several times (think Dr. Evil saying “shut it”) and give “po-po” the bird during a car chase.

The gods help me, I’ve come to rely on these movies. Nowhere can I find such incoherent babble parading as cinema, and it’s delightful to tear into most Bay films with righteous anger, calling out the most belligerent examples of white privilege on screen.

Where else can I watch a white dude (Wahlberg) call an American Indian character “chief,” who rightly then tells him that sounds mildly “racist,” only for that gringo to call a 14-year-old Latina girl (Isabela Moner) “little J-Lo” not five minutes later. But we should be used to this by now considering “Revenge of the Fallen’s” Autobots, the Twins, characters more racist than Jar Jar Binx (don’t argue about that; it just makes you look naive).

These films have the mind-numbing ability to block my childhood memories of “The Transformers.”

At first, these films felt like two-hour commercials for General Motors, but they’ve transformed into cautionary tales, warnings of what happens when you replace a toddler’s formula with Red Bull and let him become a director when he grows up.

Mr. Bay, once again, lives up to his reputation, providing us with the worst film of the year.