Mundell started as an entry-level firefighter and rose through the ranks before being appointed fire chief in 2013. Mundell said it was a rewarding career and thanked his fire department colleagues, city staff and members of the community for their support. Deputy Chief Greg Barton will become the department’s new chief on June 23. 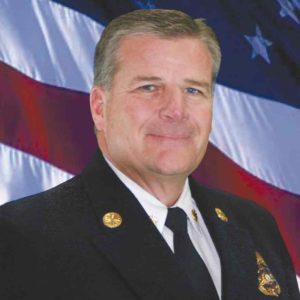 Beverly Hills Fire Chief Ralph Mundell is retiring and will be succeeded by Deputy Chief Greg Barton.
(photo courtesy of the city of Beverly Hills)

“It’s been incredibly rewarding and an honor, not only to be fire chief, but to have served with the city of Beverly Hills for 31 years,” Mundell said. “It’s just been a wonderful, wonderful career.”

Mundell implemented numerous programs to make the city safer. He helped develop an active-shooter response plan, in which fire department personnel are equipped with body armor and other tools to protect themselves when entering locations where victims may be injured.

Prior to the program’s implementation, fire department personnel had to stand by until police declared a scene safe. That sometimes involved searching entire buildings, resulting in precious time lost in being able to help victims, Mundell said.

With the protective equipment, Beverly Hills Fire Department personnel can enter a room or portion of a building that has been cleared by police, allowing them to more quickly administer life-saving treatment. Mundell said the approach has been replicated by fire departments through Los Angeles County, in San Diego and some other cities.

“Prior to 2013, we would stage at a close location but couldn’t get involved until the police department said it was safe to enter,” Mundell said. “What we saw at Columbine, Sandy Hook and Virginia Tech was if we waited, more people would perish. If we could find a way to actually get inside, we could save more lives. We looked for ways to better help people in these types of incidents and found that if we can put them in body armor and equip them with blood-clotting agents and other things we could save lives. It allows them to take immediate intervention.”

Mundell also implemented an innovative approach to providing emergency treatment by putting paramedics and emergency medical technicians (EMT) on bicycles. The program was created to improve response times when construction may hinder fire trucks from reaching the scene of an emergency. He said it is particularly important given the Purple Line Extension subway construction in Beverly Hills and the reconstruction of Santa Monica Boulevard. The program is also beneficial in treating people at special events where large crowds can hinder emergency responses.

“We have paramedics and EMTs assigned to firefighter apparatuses, but once we saw the challenges of construction, we realized lives could be at stake if we weren’t able to quickly get [fire trucks] into locations,” Mundell said. “We have both paramedics capable of going in on bikes and EMTs so we can get into those locations.”

Mundell, 54, grew up in Valencia and still lives in the Santa Clarita Valley, but said Beverly Hills is his second home. He said the most memorable emergency in the city during his tenure was the 1994 Northridge earthquake, which damaged buildings and sparked fires.

The earthquake occurred at 4:30 a.m. while Mundell was off-duty at home. After checking on fellow firefighters in his neighborhood, he raced down to Beverly Hills.

“A lot of freeways and roads were damaged in the area but we found out Sierra Highway was still open,” Mundell said. “I got into Beverly Hills at 9:30 and immediately went to work. We responded to a fire in the Maple Drive area. That was just the start. I was here for four days.”

Mundell said he is looking forward to spending his retirement with family and traveling to Alaska with his wife, Donna. Mundell has two sons: RJ, a Burbank firefighter, and Brian, a baseball player for the minor league Lancaster JetHawks, an affiliate of the Colorado Rockies.

Barton is a 22-year veteran of the Beverly Hills Fire Department who has served as captain, fire marshal and battalion chief. He has special expertise in complex rescue operations, hazardous materials, brush fire containment and emergency management.