Citing Wells Fargo’s involvement in the Dakota Access Pipeline and its recent account-opening scandal, the Los Angeles City Council took another step toward divesting the city from the bank on Tuesday.

“It’s time for us to endeavor to only do business with ethical financial institutions that have high standards, and ethical standards,” said Councilman Mitch O’Farrell, 13th District. 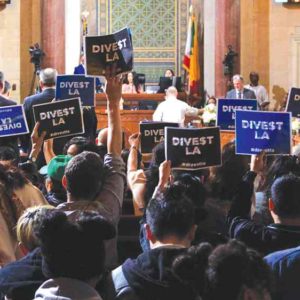 Protestors urged the City Council to divest from Wells Fargo at a meeting in March at City Hall.
(photo courtesy of Divest LA)

The City Council accepted a Budget and Finance Committee report that lays out the options for divestment from all Wells Fargo holdings. Steps include developing a request for proposal for a different financial institution to handle the city’s banking, and for the Office of Finance to report on the possibility of suspending investment activities with Wells Fargo until the bank raises its Community Reinvestment Act Score to at least “Satisfactory.” It’s current score, determined by the Office of the Comptroller of the Currency, is “Needs to Improve.”

“This is a giant step forward for the city to set the tone and to say that to do business with the city and with city taxpayers, you absolutely must have higher ethical standards than what Wells Fargo demonstrated in the last couple of years,” O’Farrell said.

The effort to divest the city from Wells Fargo began with a motion presented by O’Farrell and Councilman Paul Koretz, 5th District, in March. The two councilmen were also part of a resolution adopted by the City Council last year expressing concerns about the Dakota Access Pipeline and its effects on the Standing Rock Sioux.

“We’re living in a time when we need to pay very close attention to the institutions we do business with,” Koretz said. “Are they on the side of human beings, or are they simply in business to extract a profit at whatever cost, and with no regard for human welfare, the environment or the overall health of the planet?”

“You can just imagine what we found. Unspoken, but very, very persistent and consistent redlining,” he said, referring to the practice of financial institutions discriminating against certain areas based on income levels.

In a letter addressed to the Budget and Finance Committee, Wells Fargo implored city officials to consider the history the two entities have shared, dating to 1854. The bank qualified its involvement in the pipeline, saying it is one of 17 financial institutions involved in its financing, and mentioned its efforts to consult with indigenous communities.

“We hope that you will not decide to end the long-standing relationship between Los Angeles and Wells Fargo over concerns about a single loan out of the millions of loans that comprise our large, complex portfolio,” said the letter, signed by David DiCristofaro, a Wells Fargo executive vice president.

His letter did not address the City Council’s concerns about the bank’s recent scandal in which employees opened customer accounts without their authorization. Los Angeles City Attorney Mike Feuer filed a civil lawsuit against Wells Fargo in 2015 as a result of the scandal.

The Seattle City Council voted in February to sever ties with Wells Fargo. The West Hollywood City Council also discussed divesting from Wells Fargo based on its ties to the Dakota Access Pipeline and to President Donald J. Trump. West Hollywood Councilman John Duran, however, said the city should be careful about “striking and hitting … a liberal-leaning bank in a sanctuary city” – especially given Wells Fargo’s history of supporting the LGBT community and AIDS relief.

Councilman Mike Bonin, 11th District, said the city should look to make its divestiture from Wells Fargo part of a larger movement to be more conscious of the institutions the city does business with.