According to the Los Angeles Homeless Services Authority (LAHSA) annual point-in-time homeless count, homelessness in the city of Los Angeles increased by 20 percent to 34,189 people over the past year.

“[The results are] a stark reminder that we continue to face a growing crisis in Los Angeles,” said Mayor Eric Garcetti. “While the passage of Measures H and HHH are welcome developments that will help ease our region’s fiscal burden, we cannot afford to be complacent about the challenge of healing and rehabilitating the tens of thousands of children, veterans and families that find themselves living at the margins in our city.”

In November, voters passed two homelessness initiatives to help combat the crisis: Measure H will pay for services that are expected to help lift 45,000 people out of homelessness; Proposition HHH is estimated to build up to 10,000 units of permanent supportive housing over the next decade. 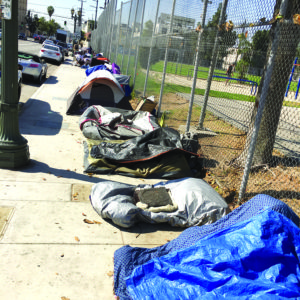 Los Angeles County Supervisor Sheila Kuehl said the results make “it very clear that our continuing homeless crisis is being driven by a housing crisis.”

“Even though the county found housing for 14,000 people last year, thus ending homelessness for them, we just can’t keep up,” she said. “Greater numbers of Angelenos are falling into homelessness because they simply cannot afford the soaring cost of renting.”

She said rents in the county have increased 32 percent since 2000 while renters’ incomes have remained flat.

“80 percent of extremely low-income households now pay more than 50 percent of their income to rent,” she continued. “Economists suggest that in a stable housing market that cost should not be more than 33 percent. This means that many residents of this county are living on the edge, one small stroke of bad luck away from losing their homes, and more are falling into homelessness than we can house each month.”

She said increasing rents have led to a significant shift in who experiences homelessness.

“We can agree that there are men and women on the streets who suffer from mental illness, but those numbers have been declining such that the root of our homeless crisis now lies in an economic imbalance linked to our housing market,” she explained. “But I am deeply concerned that, over the next few years we will continue to be overwhelmed by people for whom rents are simply unsustainable. These men, women and families will continue to fall into homelessness I want to challenge my colleagues at all levels of government to squarely face the realities of our housing market. For far too long policymakers nationally, in the state, and locally have prioritized real estate profit over a healthy housing market. Weak housing and rent control regulation combined with short-sighted land use planning has turned L.A. County into the most unaffordable place to live in the entire country.”

She added, “I need my constituents to join with the county’s efforts by supporting the siting of affordable housing in their communities, telling their state lawmakers that ‘Costa-Hawkins’ anti-rent stabilization measures must be eliminated, and opposing the federal government’s draconian cuts to housing and anti-poverty programs. The news today is deeply disturbing and it will take all of us to reverse this trend.”

LAHSA is a joint powers authority of the city and county of Los Angeles, created in 1993 to address the problems of homelessness. LAHSA is the lead agency in the HUD-funded Los Angeles Continuum of Care, and coordinates and manages more than $132 million annually in federal, state, county and city funds for programs providing shelter, housing and services to homeless persons.