The Hollywood Pantages Theatre has announced a lottery ticket policy for the national tour of the nine-time Tony Award-winning Best Musical “The Book of Mormon,” which runs through Sunday, July 9. 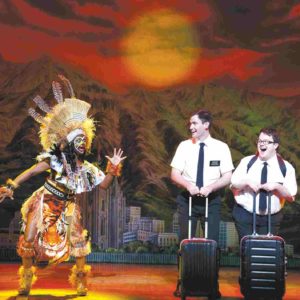 A pre-show lottery will be held at the Hollywood Pantages Theatre box office prior to every performance, making a limited number of tickets available for $25. Entries will be accepted at the box office beginning two and a half hours prior to each performance.

Each person will print their name and whether they want to purchase one or two tickets on a card that is provided. Two hours before curtain, names will be randomly selected. Only one entry is allowed per person. Winners must be present at the time of the drawing and must show valid ID to purchase tickets.

“The Book of Mormon” is based on the book, music and lyrics by Trey Parker, Robert Lopez and Matt Stone. Parker and Stone are the four-time Emmy Award-winning creators of the landmark animated series, “South Park.” Tony Award-winner Lopez is co-creator of the long-running hit musical comedy, “Avenue Q.”

Regular tickets start at $39. The Hollywood Pantages Theatre is located at 6233 Hollywood Blvd.